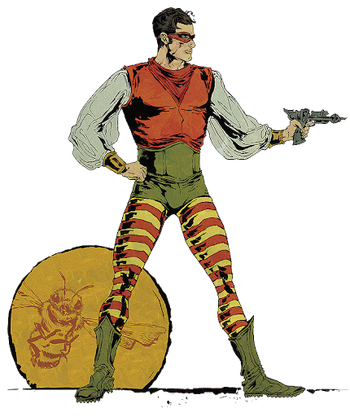 Richard Raleigh was the first Red Bee, a superhero of the Golden Age. An assistant to the District Attorney, Richard Raleigh became tired of seeing criminals get off on technicalities and decided to use his skills as an apiarist and fighting abilities to fight crime as the Red Bee.

Attack Potency: Wall level (Should at least be comparable to DC heroes from the same era, Bowled a crystal ball hard enough to knock a man off his feet, Punched a guy a foot into the air)

Speed: Subsonic, likely higher (Agilely swinged down a building, Escaped a mansion before it collapses)

Lifting Strength: Class 1 (Lifted a barrel full of river water over his head)

Durability: Wall level (Unharmed after jumping out of a plane in the process of taking off, Survives a statue being thrown into him hard enough to break in half, His group gets hit by the Human Bomb exploding on them, and later its shown that he survived)

Intelligence: Above Average (Was a assistant to the District Attorney)

Start a Discussion Discussions about The Red Bee (Golden Age)