There are men and women that have the ability to control their shadows, molding them into shapes according to their will. These "Shadow Users" gain this special ability through some traumatic event from their past, creating darkness and sorrow in their soul.

Call is a Shadow User, but his shadow, named Siva, was once human. Now, he is on a search to find the individual responsible for turning Siva into a shadow and return Siva to his body. 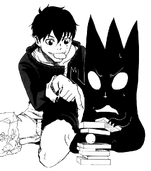