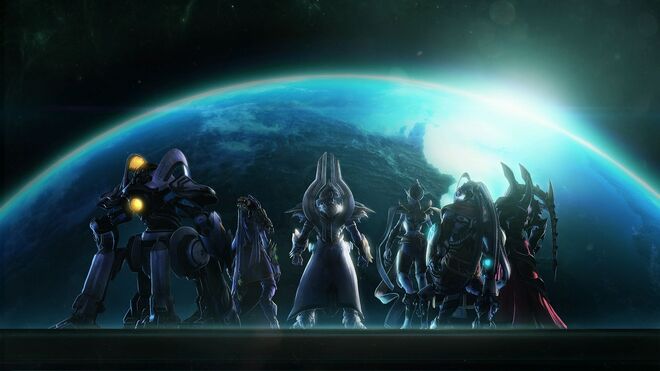 The Protoss are one of the three dominant races in the StarCraft universe. The race was created and artificially advanced by the Xel'naga, resulting in an incredibly rapid evolution and unstable, yet vastly powerful, race. They are incredibly advanced, controlling incredible technology and bearing potent psionic powers. With their full armada, they are able to control many solar systems at once, maintain a galactic presence, and can burn the surfaces of planets with several of their Capital Ships, such as Carriers. As a race, the Protoss are incredibly intelligent, and are able to access the thoughts and memories of all their collective ancestors, resulting in Protoss individuals having vastly superhuman intelligence. Though they can be overconfident and prideful as a race, this is not unwarranted, as those who wish to challenge the Firstborn will likely soon regret it.

Name: The Protoss, the Firstborn

Gender: Both male and female

Powers and Abilities: Superhuman Physical Characteristics, Energy manipulation and weaponry, Energy Projection, Mastery of various types of weapons, Telepathy, Telekinesis via Templar, Teleportation both individually and of vessels, Technological Manipulation (are masters of technology and a piece of Protoss tech onboard the Terran ship Hyperion easily fixed a broken fabricator when Stetmann placed it near the Protoss tech), Precognition, Forcefield Projection, Illusion Creation via High Templar and Sentries, Durability Negation via Psionic and Warp Blades, Fusionism between Templar, Flight and Spaceflight with various ships, Can turn matter into energy and vice versa via Warp Prism, Can manipulate matter on a sub-atomic scale to store nearly limitless information, Time Manipulation and Time Stop via Mothership and the Spear of Adun, Regeneration (Low, Low-Mid with Technology), Longevity (a 200 year-old Protoss is still considered young), Gravity Manipulation via Capital Ships, Can create wormholes and portals, Can bring dead warriors back to life and create Artificial Duplicates of long dead personalities within a 99% margin of accuracy to the original, Self-Resurrection, Nanotechnology, Healing via Templar and Artanis

Attack Potency: Up to Multi-Continent level (Artanis, Alarak, and Zeratul are all on par with, if not superior to, Sarah Kerrigan in her Primal form) | At least Small Planet level (A single battle station, Cybros, is able to burn off the crust of a planet; many ships in the Protoss fleet are able to do this)

Speed: Superhuman combat and movement speed (Can react to and combat Zerglings and similarly fast Zerg), Massively FTL+ flight speed (Capital Ships are able to travel from the center of the galaxy to its edge in a short amount of time)

Lifting Strength: Up to Class 10 (Protoss hero units, such as Artanis, should be at least this strong)

Striking Strength: Up to Multi-Continent Class (Protoss hero units, such as Artanis, should be at least this strong)

Stamina: Very High (Able to fight for long periods of time without tiring)

Weaknesses: If bound to the Khala, they can be controlled or damaged via their connection to it; are generally overconfident.

Technology: Incredibly advanced cybernetics (such as the Dragoon and Immortal), artificial intelligence (such as the Sentry, Warp Prism, and more), enormous structures, massive spaceships (Protoss arkships, such as the Spear of Adun, are over 70 kilometers long), psionic arrays and teleportation systems, and life-wiping space stations