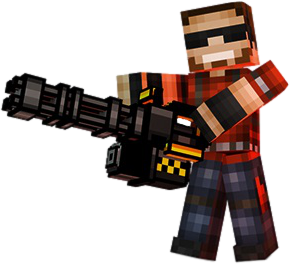 The Player (referred to as Newbie in the Skins menu) is the main protagonist in Pixel Gun 3D's Campaign and Multiplayer modes. He lives on a farm in the city of San Blockcisco in Pixelated World, but he heard that zombies are coming, so he killed many of them, traveling throughout the city and obtaining new guns until he came across the Silent School where he found a portal dug up underground. He jumped into the portal and he was transported into the Block World. There, he met the Survivor Girl, who had accidentally awoken the Dragon, who in return sent all the monsters to invade the Pixel Gun world.

After defeating the Dragon, The Player asks it to chase out all the monsters from other worlds, which it agreed to. They flew to the Crossed Worlds where there was a barrier preventing the Dragon from further helping the Player and the Survivor Girl. After being dropped off, the Player and Survivor Girl fended off more monsters from Pixelated World and Block World at the same time, including new ones. Then they found a castle, which they opened the door to find the Wizard, who upon entry, shouted that he had guests for dinner. The Player defeated the Wizard and he demanded answers as to why everything has turned cubical. The Wizard told the Player about how the Creator had created the Pixel Gun universe, but then the Bug turned everything cubical. He then teleports the Player and the Survivor Girl to the Moon, where they attack aliens on a moonbase and steal a UFO, where they fly back to Earth and confront the Creator, who says the real story about how he was creating a video game (The entirety of Pixel Gun 3D), but then an unrecoverable code error was made, and the Bug was born. The Creator had the Player put on a virtual reality headset, and the Player was transported into the video game where he confronted the Bug. He promptly defeated the Bug, and it turned him into a bug and exiled him to the internet after.

The Player was then caught by an arm from a spaceship and met the Spaceship Captain, who turned him normal again by entering the spaceship. Right after the Player had gone into the spaceship, an armada of enemy drones was invading the ship, so he had to stop them. After the Player defeated the drones, the Spaceship Captain told him about an entity named Cubic that has trapped many people inside of the dimension and forces them to play a variety of games. The Spaceship Captain then concocts a plan to stop Cubic by gathering all of the Champions to plan an assault on the Cubic Citadel. The Player then has to go through a variety of levels, saving the Champion of Cubota 2, Teleportal Champion, and the Parkour Champion from Cubic's games, and all of them go to the Cubic Citadel to face off against Cubic. However, the Admin takes on the form of the newbie and clones itself to stop them from reaching Cubic. After defeating the Admin, the Teleportal Champion opens a portal to the top of the Citadel, to have The Player fight Cubic. The Player defeats Cubic and it looks like he will be sent out of the game, but then Cubic resets the game on the Player, and he has to find a way to get out of the game for real and to defeat Cubic once and for all.

Attack Potency: Small Building level (Capable of destroying vehicles in Battle Royale mode, and is capable of vaporizing other players with certain weapons. Most of his abilities bypass conventional durability)

Durability: Small Building level (Can survive numerous attacks from weapons that can destroy vehicles and should be comparable to him)

Stamina: Seemingly limitless (He does not get tired)

Range: Hundreds of meters with normal guns, limitless with the Prototype (It is powered by a portal inside the gun, which makes a portal and shoots an energy blast to the other side of the portal, which has no limits to how far it can go)

Standard Equipment: The Code Weapons, a standard Pixel Gun and the 0Xbadc0de (A rocket launcher used for elevating himself or moving faster)

Intelligence: Genius (Figured out a way to harm Cubic, who is superior to the Bug, who can't be destroyed by 3-D means)

Weaknesses: Slightly overconfident (Refers to himself as a "hero" when he hasn't done anything heroic at that point in the story)

Sans (Undertale) Sans' Profile (Speed was equalized and The Player had access to all his clan weapons, medkit, jetpack, and resurrection)

Start a Discussion Discussions about The Player (Pixel Gun 3D)