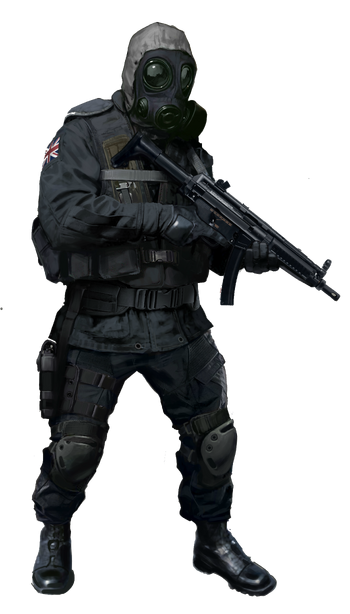 The Player is the playable character of all the games of the Counter-Strike franchise. As a counter-terrorist, players must prevent terrorists from detonating the bomb at a determined station, save hostages, and eliminate the terrorists to win the match. Or, on the other hand, being a terrorist, having the goal of detonating the bomb, prevent counter-terrorists from saving hostages, etc. Players can also turn into a VIP, where your goal is to get alive in the rescue zone to escape from the map.

Durability: At least Street level (Can barely survive explosions at close range and being shot by powerful weapons), Wall level with armor (Can withstand point-blank grenades)

Stamina: High (Can constantly fight even with severe injuries)

Standard Equipment: A full list of weapons can be found here

Retrieved from "https://vsbattles.fandom.com/wiki/The_Player_(Counter-Strike)?oldid=5645758"
Community content is available under CC-BY-SA unless otherwise noted.