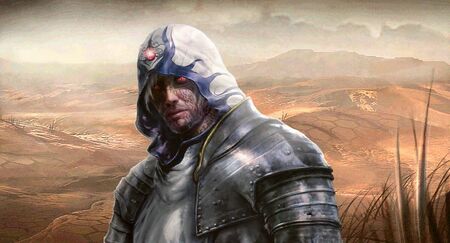 The Planeswalker is among the most powerful beings in the multiverse. Within the game, they represent identities of the players, using cards that are meant to represent spells used from all over the Magic the Gathering multiverse.

The Planeswalker has also made an appearance as the main character in the video games, primarily the Duels series. These games usually consist of a simple story of The Planeswalker traveling the multiverse defeating gods and planeswalkers alike, aquiring new spells in the process.

Attack Potency: Multiverse level+ (As an Oldwalker, they are comparable to other Pre-Mending planeswalkers like Urza)

Durability: Multiverse level+ (Can take hits from other Planeswalkers within their tier)

Stamina: Limitless. Contains immense amounts of mana that is continuosly increasing due to various artifacts and spells. Can draw more mana from the plane and instantly refills all mana every moment.

Standard Equipment: Use a wide variety of Artifacts each with their own unique effects

Intelligence: Possess complete mastery of all five colors of mana as well as the colorless mana that exists outside the spectrum. Knows every single type of spell and artifact in the entire series and has knowledge of the Multiverse. Can use a plethora amount of blue spells to further increase their intelligence.

Note: Counterspells, despite its name, has shown to counter things beyond just magic. It has shown to be capable of countering a barrage of arrows, artifacts, matter, living beings, and even countering someone's existence.

Start a Discussion Discussions about The Planeswalker (Magic: The Gathering)