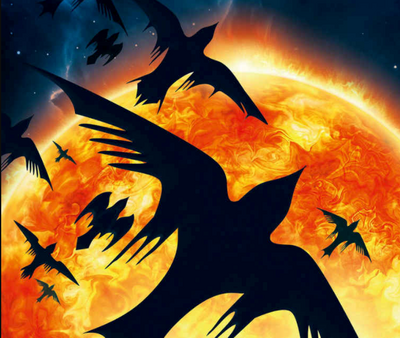 Photino Birds are an informal name given to a species of dark matter creatures, which are colonizing all the stars of the universe, feeding off the energy in their cores. Unaffected by the physical heat of the star, the creatures simply orbit its gravity well. Photino Birds gain sustenance by staying within stable, non-extreme wells of gravity. While an active star provides such gravity, it also runs the risk of destabilizing into supernovae which in turn collapse into neutron stars and ultimately into black holes; black hole gravity is too extreme for their purposes. Therefore, the Photino Birds engage in a campaign to prevent supernovae by prematurely stalling the fusion reaction of every star in the universe. This will cause these stars to stop emitting energy and instead cool into white dwarves: still massive enough to exert gravity for the Photino Birds but completely stable.

Name: Referred to as The Photino Birds by humans, also called Photino Fish, originally simply known to humanity as "Dark Matter", real name (If they have one) unknown

Age: At least over 13 billion years old, exist in a self-sustaining time-loop that makes their age essentially infinite, although technically beyond the concept of time

Territory: Every part of the multiverse dominated by Dark Matter

Attack Potency: Star level to Large Star level conventionally (They feed on stars and can prolong supernovae by stalling fusion), Multi-Solar System to Galaxy level with galaxy projectiles (They launch galaxies at relativistic speeds as projectiles) | Low Complex Multiverse level in scope and best tech (Due to their dark material existence, they outnumbered the Baryonic-based Xeelee across all of Configuration Space, which contains an uncountably infinite number of matter configurations of an uncountably infinite number of finitely sized 10-D universal domains, where the 7 extra spatial dimensions are compactified to a Planck scale. The Photino Birds are considered to be superior to The Xeelee as well as all stages of humanity, with the Xeelee eventually deeming the war against them unwinnable and deciding that simply evacuating themselves and other baryonic life from the standard multiverse was the only solution against them)

Industrial Capacity: The Photino Birds have absolute control over all dark matter in the entire multiverse and are capable of using it to produce hyper-advanced technology

Military Prowess: The Photino Birds have destroyed countless civilizations and have been in a war with the Xeelee since the beginning of time

Weaknesses: None Notable, though they do struggle at tapping into sources with high amounts of gravity

Start a Discussion Discussions about The Photino Birds