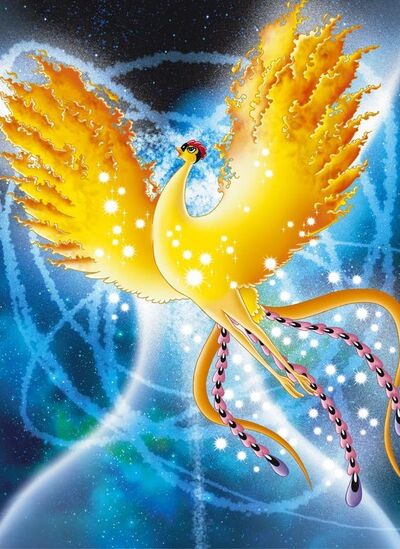 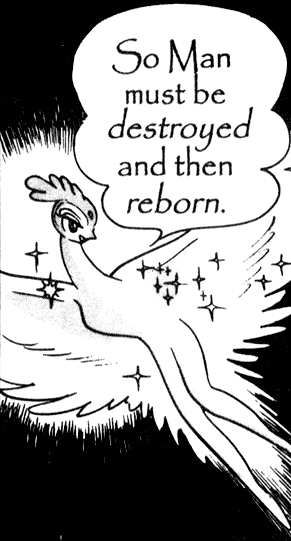 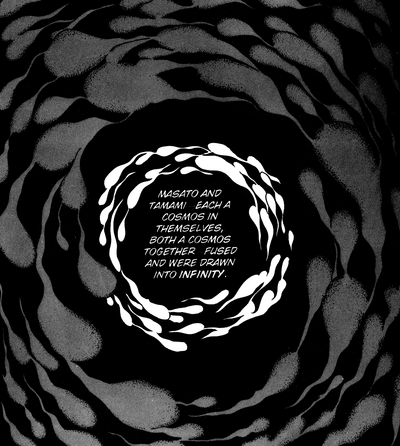 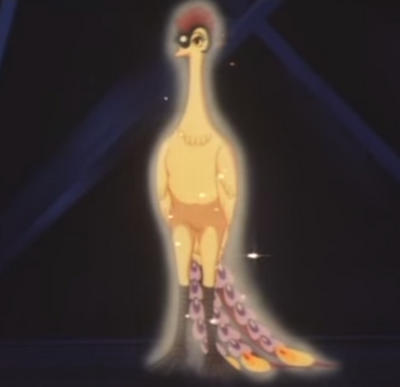 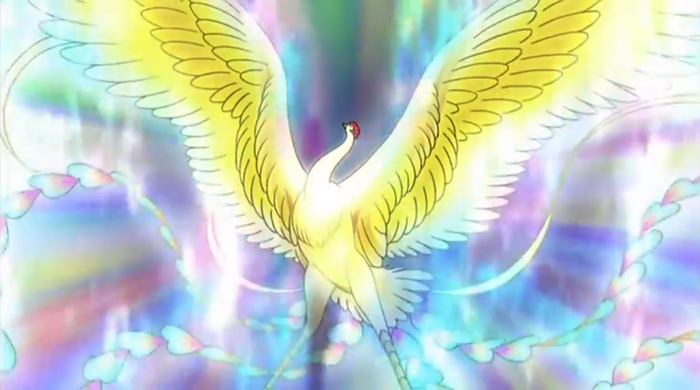 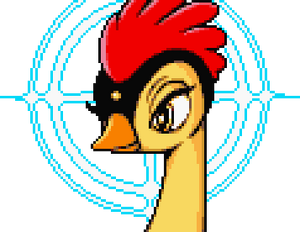 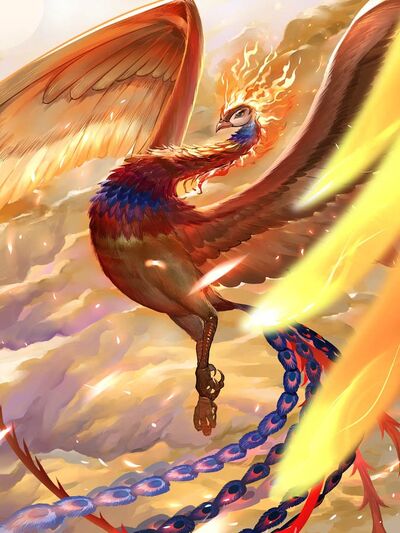 The Phoenix is the main character of the unfinished manga Phoenix series by Osamu Tezuka. The Phoenix, the bird of fire, is a supernatural being, a creature that is everlasting, yet is nonetheless mortal. She is a physical embodiment of the eternal and the ethereal, of permanence and impermanence, of the duality of man, of life, of the earth, and of the universe. The Phoenix is, much like the cycle of life and death, a being of duality. She can be equal parts caring and cruel, a giver of life and a taker of the same; more often than not, she acts as an impartial, uninvolved observer, but when humans seek her out or attack her, intent on consuming her blood to gain themselves personal longevity, she’s entirely capable of frightening savagery.

The Phoenix is not a force of good, she is a force of nature, an intrinsic part of the earth; her motivations and goals are unclear, and more often than not not the focus of her stories.

Her story was never completed, having been cut short by Tezuka's death in 1989. Several of the stories have been adapted into anime series and OVAs, and even a live-action movie. Tezuka considered Phoenix his "life's work".

Gender: Inapplicable. Projects itself as a Female

Age: As old as creation (Has also experienced the cycle of life countless times)

Classification: Immortal bird, "The bird of fire/Firebird", God's alterform, "what men have always called god", super liveform, Emissary from the sun, Monster (Momentarily acts and is referred to as one in Phoenix 2772), Legendary bird, Mysterious alien lifeform, "The very embodiment of the cycle of life and death" (In Astro Boy: Edge of Time)

Powers and Abilities: Superhuman Physical Characteristics, Immortality (Types 1, 2 & 3) Can survive being impaled in several places at once, although she once died from being decapitated), Regeneration (At least High-Mid, likely Mid-High. Should have the same as the beings she grants immortality, such as Yodomi, who was going come back from this and regenerated from having her pieces reduced to ashes. By herself able to come back from this. When her body becomes too old Phoenix decides to burn herself and reborn from her ashes, however this generates her to have an infant body), Technology Manipulation, Resurrection (Can resurrect herself and others, including robots), Healing (Its blood and feathers can heal others beings. Doesn't need to be around to heal others), Blood Manipulation, Age Manipulation, Power Bestowal (Those who drink its blood while she is still alive gain Immortality [Types 1, 2 & 3]. Just like Phoenix, they still age but they cannot die from natural causes, when their body becomes too old they abandon it to become pure existence. She can also alter its blood to put those who drink it into a cycle of having their age reversed and back to normal forever. Turned Godo into a baby. Doesn't need to make others drink its blood or be around to make them immortal. Give Astro Boy the ability to time travel and keep his memories even when going back in time), Flight & Spaceflight, Universal & Dimensional Travel (Can fly around the Cosmos/Multiverse, travel through different dimensions, and easily move from "one end of the Cosmos to the other"), Telepathy (She communicates telepathically. Upscaled from her daughter, who can read a person's every thought), Teleportation (Demonstrated here and here), Energy Manipulation & Shapeshifting (Uses energy waves to take any form it wants), Nature Manipulation, Elemental Manipulation (Fire, Earth, Water and Plant Manipulation; Likely altered the nature of Fremil to create impossible phenomena that reverts any consequence that modifies the planet to its original state. Its body can produce fire to burn others. Suppressed the tremors of Eden 17 for hundreds of years, when she decided to no longer help the planet this caused the destruction of everything on its surface), Aura & Light Manipulation (Its presence emits a shine described to "shine like the sun", being "almost as radiant as the sun", "as bright as the sun", and that it would cause someone to go blind for looking at it for a while), Smoke Manipulation (Can produce smoke in the OVA), Spatial Manipulation, BFR (Returned Satoku from a lost galaxy to Earth. Can bring others to the future and back to the past), Time Travel, Time Manipulation, Reality Warping, Creation, Life Manipulation, Acausality (Type 1), Statistics Amplification, Size Manipulation (Can shrink itself and others to the size of elemental particles, dive into its cells and keep shrinking even more. Can move into another dimension where the universe would be no more than a particle), Matter Manipulation, Absorption (Can absorb beings to make them part of the Cosmos), Transmutation (Can transform people into plants if it wishes to do so. Turned Olga into a human in the OVA), Cloth Manipulation, Biological Manipulation, Fate Manipulation (Turned Satoku ugly generation by generation and made his descendants eternally wander through space), Dream & Nightmare Manipulation (It's suggested that she caused Akanemaru to reincarnate several times during a dream, directly talking to him at the end of it. Caused Shunkan a nightmare that showed him what would happen if he became immortal), Breaking the Fourth Wall (Told the readers Romy's story), Incarnations/Avatar Creation (Unexplored, but it has an untold number of incarnations), Non-Physical Interaction/Soul Manipulation (Can lead spirits to other places and affect them with (what appears to be) her brightness. Her feathers were used to heal spirits and ghosts. Buddhist deities were afraid of its power), Weather Manipulation (Dispersed a storm), Cosmic Awareness, Likely Astral Projection (Brought Masato around the Cosmos while leaving his body intact), Can likely become Non-Corporeal if she so desires, Nigh-Omniscience, Heat Manipulation, Body Control (Demonstrated in the OVA), Illusion Creation (Demonstrated in the OVA), Possession (In the OVA, she used parasites to take control of someone and breathed life into a dead robot by possessing it), Fear Manipulation (In the OVA, she caused fear to a ship when robots aren't usually able to feel emotions. The ship was unable to obey to commands from his captain and fight when knowing that this would kill the crew and itself, however it eventually abandon its fear), Death Manipulation (In the OVA she can sacrifice living beings to revive planets, killing them instantly), Likely Mind Manipulation (Because of her power, Astro was able to see somebody's memory), Unaffected by heat and radiation | Presumably all previous abilities to a greater extent, Non-Corporeal, Higher-Dimensional Existence, Large Size (Type 9), Omnipresence

Attack Potency: Varies from Below Average Human level (Grew to the size of a cell) to Universe level (Can move into a dimension where a whole universe would be no more than a particle, with many universes together being a cell), able to negate durability in many ways | Multiverse level+ (Is one with the entire Cosmos, the sum of existence which is described as a living organism composed of infinite universes), able to negate durability in many ways

Speed: Varies from Massively FTL+ (2.74803057253717006e+29c) to Infinite | Immeasurable (At a comparable state of existence, if not much greater, then Elder Masato, who transcended space and time upon becoming "God") with an Omnipresent state of existence (Is the Cosmos/Multiverse)

Lifting Strength: Varies from Below Average to Universal | Immeasurable

Striking Strength: Varies from Below Average Class to Universal | Unknown

Intelligence: Nigh Omniscient (Sees all Macrocosms and all of time happen across countless worlds at once. Has been claimed to know all things)

Note: This is a Composite profile of Phoenix, however the storyline Early Works is considered non-canon given its contradictions to the lore of the Verse. 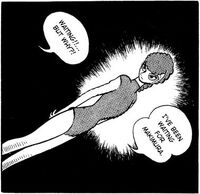 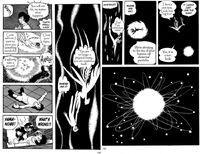 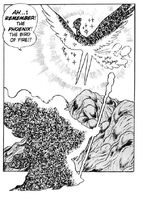 Masato reuniting with Phoenix after billions of years 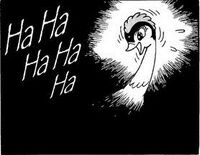 Phoenix turning Godo into a baby