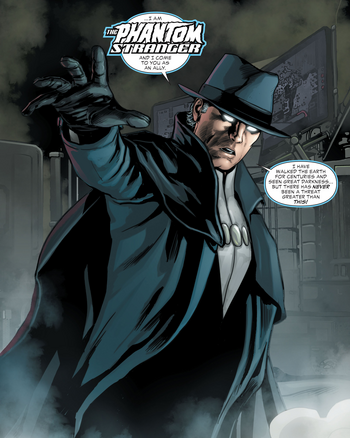 The Phantom Stranger, formerly known as Judas Iscariot, is a member of the infamous Trinity of Sin, a group of the three most egregious sinners in history. Judas' betrayal of Jesus Christ earned him membership in the group, and he was cursed with immortality, doomed to wander and serve the Presence until he gained redemption. He wears a necklace made of his pieces of silver, losing one piece each time he completes a significant task for the Presence. His mission has forced him to become both hero and betrayer, and he has become a legendary mystical figure over his centuries of wandering.

Classification: Human, Servant of the Presence

Superhuman Physical Characteristics, Immortality (Type 1 and 8; The Presence will return him, even from non-existence, as long as his mission remains unfulfilled), Magic, Flight, Extrasensory Perception (Can sense the local area around him), Cosmic Awareness (In tune with the chronal flow), Regeneration (High-Mid, possibly higher; Regenerated from shattered pieces, including his metaphysical self), Time Stop (Can stop time in an area of his choice), Energy Manipulation (Can use mystic energy to attack), Matter Manipulation (Separated Frankenstein's hand), Transmutation (Transmuted the Spectre to wood), Telepathy (Took Nightmare Nurse with him into Constantine's mind), Telekinesis (Lifted Terrance into the air), Teleportation (Can teleport himself and others), Invisibility (Can turn completely invisible), Intangibility (Phased through Corrigan), Attack Reflection (Reflected Raven's soul-self), Dimensional Travel (Brought the JLD to Heaven), Portal Creation (Rescued people with portals), Mind Manipulation (Made a woman change her profession), Empathic Manipulation (Tore the love out of someone and took it into himself), Soul Manipulation (Can destroy souls), Size Manipulation (Grew into a giant alongside the Spectre), Deconstruction (Dissolved a man so only consciousness and spirit remained), Forcefield Creation (Can create shields in front of and all around himself), Illusion Creation (Fooled Blight into thinking he killed him; Created an illusory body for Katana to cut), Astral Projection (Can leave his body to communicate unnoticed), Air Manipulation and BFR (Created a gust of wind to send both women and demons back home from Las Vegas), Healing (Helped Nightmare Nurse recover from Thaumaton)

Resistance to Magic (Quickly overcame Constantine's weakening enchantment and chains), Mind Manipulation (Broke out of a mind trap from Blight, the embodiment of humanity's evil) and Empathic Manipulation (He constantly endures mental suffering so strong that it quickly forced Belial to beg to have it removed, despite the latter having endured torture from Trigon), Possession (Deadman couldn't possess him), Soul Manipulation (Repelled psychic spirits that were choking his soul), Fire Manipulation (Flames didn't touch him), Existence Erasure (Overcame the Spectre's existence erasure)

Attack Potency: Solar System level (Capable of battling and injuring those comparable to him, such as Post-Flashpoint Spectre (Jim Corrigan). His own corrupted attack caused himself pain)

Durability: Solar System level (Only got a brief bloody nose from taking a punch from a crazed Superman); His immortality makes him extremely difficult to kill

Stamina: Extremely high, capable of enduring endless mental suffering in hell without breaking and fighting for many hours at a time without getting tired.

Range: At least hundreds of meters with magic. Interdimensional via portals

Intelligence: His 2,000-odd years of wandering while serving the Presence's directions have resulted in extensive knowledge of magic, extradimensional realms, the afterlife, demons, etc. He is looked to for advice and aid from some of the most skilled and knowledgeable magicians in the universe, such as John Constantine.

Weaknesses: Is sometimes unable to directly interfere in situations, in accordance with the commands of the Voice of the Presence.

Start a Discussion Discussions about The Phantom Stranger (Post-Flashpoint)