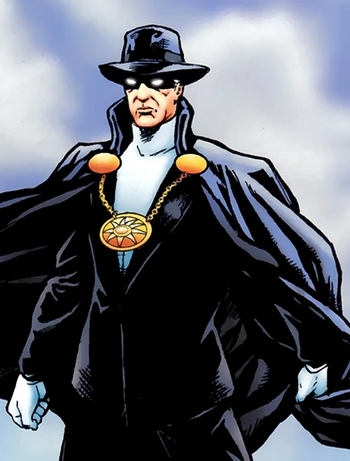 The Phantom Stranger is a mysterious, powerful entity primarily associated with the mystic side of the DC universe. His true origin is unknown, although several likely ones have been revealed over time. These include: the Wandering Jew who mocked Christ, doomed to wander until the Second Coming, an Angel who sided with neither the Presence nor Lucifer and was then charged with maintaining cosmic balance, a being from the previous universe who absorbed energy from the big bang and became a protector of humanity, and the first human to discover magic. He has directly claimed to exist since the dawn of time, and he often indirectly influences important events by guiding heroes where they need to go. Though he has been known to occasionally involve himself directly, he is often unable to due to an unknown higher order.

Name: Unknown. Aliases include the Phantom Stranger, the Grey Walker, the Brotherless One, and the Wandering Stranger

Age: Many billions of years. Has claimed to be as old as creation

Classification: Unknown. Theorized to be an Angel, the Wandering Jew, or a cosmic being

Superhuman Physical Characteristics, Immortality (Type 5; Cannot be classified as dead or alive; Couldn't be killed even by an Unbound Spectre, as long as magic exists), Magic (His magic use defies conventional classification), Flight, Stealth Mastery (Superman couldn't detect him at all), Extrasensory Perception (Can locate souls by detecting psychic traces and knew when he was being scanned), Transmutation (Can turn objects into animals), Shapeshifting (Can change form), Duplication (Can shift into multiple animal bodies), Telepathy (Can read the evil in men's minds from across the universe), Perception Manipulation (Is only visible to those he allows to see him; can conceal himself and others from telepathic searching), Mind Manipulation (Can mind control others and trap beings in others' minds; Forcefully exorcised a mental being from a Green Lantern's mind), Memory Manipulation (Can erase memories), Time Stop (Can freeze time for everyone except him and those he chooses to exempt; can freeze time for specific targets), Time Travel (Brought Tim Hunter to the dawn of time), Energy Manipulation (Can fire energy beams and wider bursts), Non-Physical Interaction (Destroyed a group of substance-less shadow demons), Forcefield Creation (Against physical, energy-based, and magical attacks), Power Bestowal (Granted Superman protection against magical attacks), Intangibility (Can phase through physical objects), Damage Boost (Amplified Psionic Lad's power), Durability Negation (Created metaphysical weapons to wound opponents on a philosophical level), Light Manipulation (Defeated a Mayan god of death despite his darkness barrier), Telekinesis (Controlled his cloak to restrain Black Lantern Deadman), Empathic Manipulation (Cast a spell of serenity to keep others calm and blissful), Soul Manipulation (Divided Superman's soul to protect him and blasted Deadman's soul out of the Black Lantern body it was trapped in), Fire Manipulation (Can shoot blasts of flame), Water Manipulation (Created a whirlpool to sink a ship), Air Manipulation (Created a raging hurricane around him with a clap), Weather Manipulation (Created a localized storm inside a building to stop a fire), Life Manipulation (Brought a stone statue to life), Dream Manipulation (Destroyed a living nightmare), Sleep Manipulation (Can ensure others remain sleeping and force them to fall asleep), Teleportation (Can freely teleport, even to dimensions without linear time or space), Portal Creation (Can create portals to other dimensions), Dimensional Travel (Can step across dimensional barriers without needing portals), BFR (Banished a demon back to Hell, and Impulse to the Speed Force), Healing (Can heal fatal injuries) Astral Projection (Can create astral projections as messengers and decoys as well as enter dreams)

Resistance to Telepathy (Psionic Lad couldn't read his mind), Hellfire (Was completely unaffected by Etrigan's hellfire), Magic (Magic bonds unraveled around him), Illusions (Dispelled illusions with a hand wave), Transmutation (Recovered from being turned into a mouse by Unbound Spectre), Death Manipulation (Knows a complex spell to counter death), Possession (Was unaffected by Eclipso's possession attempt)

Attack Potency: Multiverse level+ (Though he was ultimately defeated, he was able to match blasts with Bart Allen when the latter had access to a level of magic exceeding the most powerful sorcerers in the universe, including the likes of Doctor Fate and Mordru); Can ignore conventional durability with metaphysical attacks

Durability: Multiverse level+ (Should be comparable to his own power); His immortality makes him extremely difficult to kill

Stamina: Much higher than most other magic users, but not inexhaustible, as he has been shown to expend his energies on occasion.

Range: At least hundreds of meters with magic. Universal via telepathy

Intelligence: The Phantom Stranger is one of the most knowledgeable characters in the DC universe, possessing extensive knowledge of magic, extradimensional realms, the afterlife, demons, etc. He can fashion powerful mystical artifacts and has been shown to know alien languages he has no obvious reason for knowing, and is often shown to already know the course of events before they happen. While not directly stated, the Phantom Stranger is often written as having some form of Nigh-Omniscience, though he has stated before that he is not truly omniscient.

Weaknesses: Often prevented from interfering in situations beyond guiding others (presumably due to the Presence).

Notes: Crisis on Infinite Earths did not serve as a true reboot to the Stranger's continuity, and he displayed knowledge of the Spectre's conflict with the Anti-Monitor even after the multiverse was rewritten.

Retrieved from "https://vsbattles.fandom.com/wiki/The_Phantom_Stranger_(Post-Crisis)?oldid=5480513"
Community content is available under CC-BY-SA unless otherwise noted.