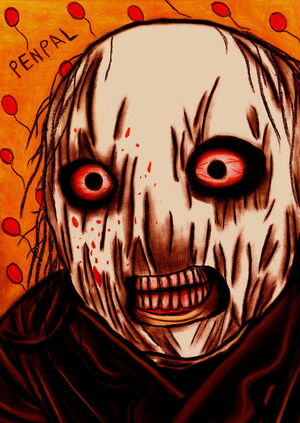 The titular "Penpal" is the unnamed antagonist of the creepypasta turned novel, Penpal. The Stalker is a pedophile who has fallen in love with the protagonist after he became the unnamed storyteller's penpal. He stalks the boy as he grows up, even secretly living under his house and kidnapping his cat and best friend. The Penpal out of jealousy even kills the main character's girlfriend.

Age: Unknown, though at least mid-adult

Powers and Abilities: Peak Human Physical Characteristics, Stealth Mastery (Was living in the same house as the protagonist without him or his mother knowing. Stalked the protagonist and even snuck into the protagonist’s house without being spotted), Adept Driver, Sleep Manipulation (via ether)

Attack Potency: Street level physically (Easily killed animals of various size and species, as well as killing Mrs. Maggie. Is described as a large, strong man), Wall level with truck (Standard trucks are this level, easily mangled a young woman when it hit her)

Speed: Normal Human, possibly Athletic Human normally (Can keep up and surpass the protagonist), Superhuman with truck (Normal trucks can move this speed)

Lifting Strength: Regular Human (Easily lifted the protagonist while he was a child)

Retrieved from "https://vsbattles.fandom.com/wiki/The_Penpal?oldid=5412821"
Community content is available under CC-BY-SA unless otherwise noted.