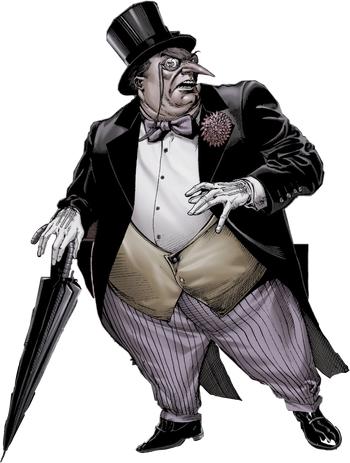 Oswald Cobblepot, a.k.a The Penguin is a fictional DC supervillain and one of Batman's most notorious adversaries. Oswald was bullied as a child for his bird-like appearance and the fact that he was always forced to carry an umbrella due to an overprotective and insistent mother. Cobblepot, born into a life of wealth, grew to become one of Gotham's most collected and eccentric villains, many times leading a charming public life as the forerunner of the Iceberg Lounge, a high society nightclub.

Tier: 9-C physically, 9-A with weaponry

Attack Potency: Street level (Can severely harm others with a single punch), Small Building level+ with weaponry (Can consistently harm Batman with his trick umbrellas.)

Stamina: Low (Has shown to wear out easily, is an overweight man)

Range: Standard Melee Range, Up to Hundreds of meters with weaponry

Penguins Umbrella: Oswalds most notable weapon is his parasol, which he usually uses to walk, but it serves multiple functions in his battles against the Dark Knight. His umbrella sports blades which can rotate and spin around, acting as a propeller blade. This allows him to use it for flight and attack. Other features of the umbrella include a poisoned tip; built in flamethrower, taser and laser; knockout pellets; reinforced shield when opened; built in explosives and guns; etc.

Intelligence: Extraordinary Genius (Has outsmarted and even worked with The Joker, Batman, Riddler, and other of Gotham's smartest. Is a successful businessman as well as a mob boss.)

Weaknesses: Psychopathically obsessed with getting revenge on anyone who insults him.

Retrieved from "https://vsbattles.fandom.com/wiki/The_Penguin?oldid=5899512"
Community content is available under CC-BY-SA unless otherwise noted.