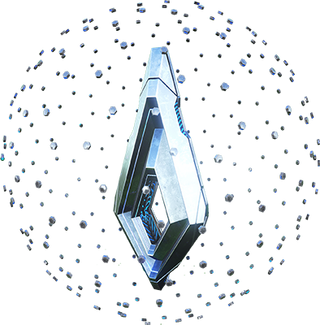 The Overseer is the final boss of the game Ark: Survival Evolved. It is the AI that oversees the experiments of an ARK Station and ultimately decides who may continue to ascend higher in the evolutionary chain and who will be terminated. It is reminiscent of the player's specimen implant, having the characteristic shape of a diamond. When transformed into the Ultimate Lifeforms and summoning Defense Units it takes the form of a mass of hexagonal prisms.

Attack Potency: At least Multi-City Block level (Considered superior to other boss monsters), possibly far higher (Implied to maintain and have control over the Arks it inhabits, though it is unknown if this is true or to what extent)

Lifting Strength: At least Class M (Much stronger than smaller creatures to an unknown extent, comparable, if not superior to other bosses)

Range: Tens of meters when transformed, Higher with energy beams

Intelligence: Likely at least Extraordinary Genius (Seemingly far superior to The Survivor), Possibly far higher within the Arks (Seemingly has knowledge on everything within the Arks as it maintains and watches over them constantly, though it is unknown to what extent.)

Retrieved from "https://vsbattles.fandom.com/wiki/The_Overseer?oldid=5681131"
Community content is available under CC-BY-SA unless otherwise noted.