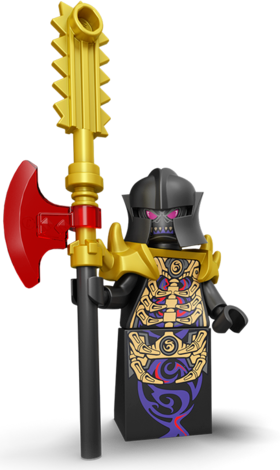 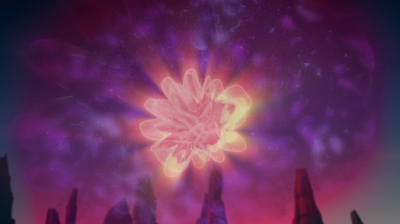 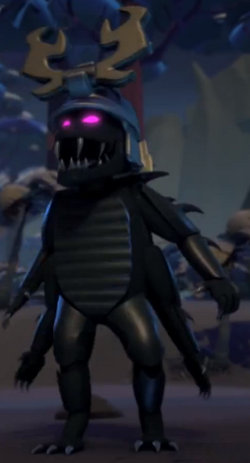 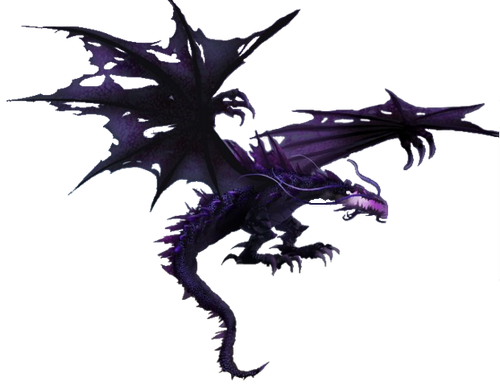 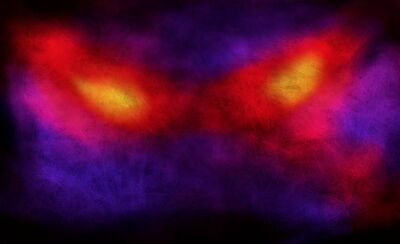 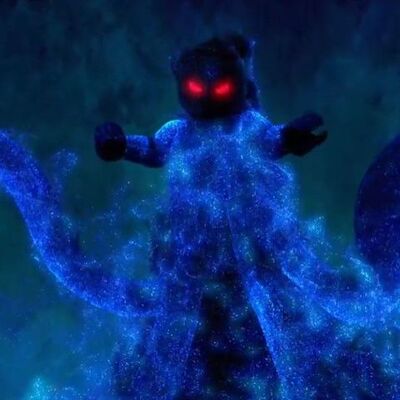 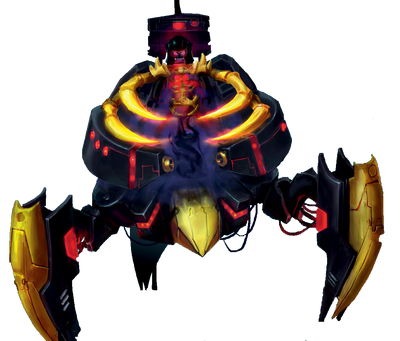 In the beginning, only two races existed, the Oni, and the Dragons, beings who controlled creation and destruction, and who fought each other in an eternal stalemate. One day, however, a child who was born of both the Oni and the Dragon was born. This child, known as the First Spinjitzu Master, was sought by both races as a means to end the war. Seeing that the two races would never find peace and couldn’t understand the balance that was necessary for existence, left the realm to create his own, which became known as Ninjago. However, as the balance dictates that a world must have both good and evil, the Overlord was born to counter it. The First Spinjitzu Master and the Overlord fought tirelessly and endlessly until The Overlord created a stone army to finally kill him. Knowing that he would eventually lose, the First Spinjitzu Master split the land in two, the Overlord being sealed into The Dark Island. However, the Overlord saw the arrival of Lord Garmadon, and thus waited for the ultimate battle between good and evil. Eventually, his prediction came to pass, with Lord Garmadon being betrayed by the Serpentine and left to rot in the ocean, eventually landing on the island. Manipulating Lord Garmadon and starting the Celestial Clock’s countdown, which would dictate the beginning of the battle, The Overlord tricked him into spreading darkness through the Garmatron into Ninjago, shifting the balance back to darkness and restoring his powers. Forcibly taking over Garmadon’s body and regaining his true form, and proceeded to corrupt all of Ninjago. However, he was ultimately soundly defeated by Lloyd Garmadon, who had become the Ultimate Spinjitzu Master and was purged from Ninjago. Unfortunately for the Ninjas, the site of his defeat was still a foothold for him to remain and allowed him to take over Borg Industries, whose headquarters were built upon it. Taking over New Ninjago City’s infrastructure and the entirety of their computer system, he began a campaign to drain Lloyd’s power in order to become the Golden Master, a legendary being of Serpentine lore who held the powers of The First Spinjitzu Master at his peak, and would be fated to enslave the world. Eventually fulfilling this role with the power of the Golden Weapons, the Overlord was defeated by Zane, who sacrificed himself to turn the Overlord’s power against himself at the cost of his own life, purging his darkness from Ninjago once more.

Name: The Overlord, presumably many other names, The Golden Master

Gender: Genderless, but referred to as a male

Age: Unknown (Born at the beginning of Ninjago, a reality confirmed to be at the very least thousands of years old, and stated to have fought The First Spinjitzu Master for a amount of time incomprehensible to the human mind)

Classification: Embodiment of all Evil and Darkness in Ninjago

Superhuman Physical Characteristics, Immortality (Types 1, 3, 6 and 8, reliant on Darkness and Evil, and on the Balance: he will never be truly destroyed as long as the Law of Balance requires him to exist), Non-Corporeal (The Overlord is actually a spirit that embodies Darkness and Evil, though he needs a body to actually fight), Abstract Existence (Type 2, Aristotelean: The Overlord is the Embodiment of Darkness and Evil in Ninjago, and can never fully die as long as The Law of Balance requires him to exist to counterbalance Light and Good, even if Darkness and Evil themselves don't exist anymore in Ninjago) Regeneration (likely Mid-Godly: the Overlord is the embodiment of all Darkness and Evil in Ninjago, and his spirit can always come back into existence after being defeated, even if there is no more Darkness nor Evil in Ninjago. Even the First Spinjitzu Master, despite destroying his physical form, was unable to fully kill him. The Overlord has also survived being erased from the Digiverse by the Ninjas [check Note for more info]), Extrasensory Perception (possesses thermal vision), Possession (The Overlord can possess other beings, bodies, and even objects), Biological Manipulation and Transmutation (Once he possesses a body, he can mutate it, gradually causing it to evolve into his final form), Technology Manipulation (The Overlord is able to enter inside computers and machines to manipulate them, and he's even able to create his own technology), Genius Intelligence (The Overlord planned to act for thousands of years, predicting Lord Garmadon's arrival, even outsmarting, tricking and abusing the latter. The Overlord was also able to perfectly understand and use Cyrus Borg's technology and the Digiverse)

Martial Arts, Weapon Mastery, Vehicular Mastery, Dark Energy Manipulation and Projection, Flight (can use his Energy Beams as propellers to fly for short distances) Telekinesis, Existence Erasure (by possessing Lord Garmadon, he's able to manipulate the Elemental Essence of Destruction), Illusion Creation, Electricity Manipulation, Darkness Manipulation, Animated Shadow and Duplication (by possessing Lord Garmadon, the Overlord has all of his powers), Resistance to Existence Erasure (capable of wielding the 4 Golden Weapons at once without any problem: the Golden Weapons can erase from existence anyone who isn't powerful enough to wield all of them at once), Mind, Morality, Corruption, and Madness Manipulation (types 2 and possibly 3: Dark Matter is the Overlord's essence: even in incredibly small amounts it can drive people to insanity, making them completely evil, and servants of the Overlord. In this state, the Overlord can use it thanks to the Garmatron. He was able to take control of all of Ninjago's inhabitants in a short period of time), Portal Creation (created a Portal to travel from the Dark Island to Ninjago), Non-Physical Interaction (Elemental Powers and Essences, such as Destruction and Darkness, are capable of harming intangible beings like ghosts. The Overlord is also able to interact with Digital Information and Data), Transformation (once enough people have been corrupted by Dark Matter, he is able to transform into his True Form), Durability Negation

All previous abilities, but greatly enhanced, True Flight, Large Size (Type 1 normally, higher with Absolute Darkness), Darkness Manipulation (in this form, the Overlord has full access to all of his Darkness-related powers and abilities, and can manipulate it as he wishes), Size Manipulation and possibly limited Spatial Manipulation (with Absolute Darkness, he can make a gigantic sphere of pure Pitch-Black Darkness [which is far larger in the inside than in the outside), in which he can grow to vastly superior size to literally eat his enemies alive), Mind, Morality and Madness Manipulation (Types 3 and possibly 4: this time, instead of needing the Garmatron to use it, the Overlord can produce it as a natural function, and even breath large quantities of Dark Matter), Breath Attack (able to shoot a powerful beam filled with Dark Matter from his mouth), Weather Manipulation (able to alter the weather in all of Ninjago), Transmutation (able to turn the Garmatron into a giant Fortress), Forcefield Creation against Golden Power (with Preparation, he was able to build a barrier capable of perfectly withstand the First Spinjitzu Master's Golden Power), Dark Matter Manipulation, Power Modification, Invulnerability, (The Overlord is able to refine Dark Matter and to completely change its capabilities, creating the Stone Army, an army of Invulnerable Warriors that are resistant to Elemental Powers, and were able to push back even the First Spinjitzu Master. He can also create Anti-Golden Armors)

Superhuman Physical Characteristics, Immortality (Types 1, 3, 6 and 8), Non-Corporeal, Regeneration (likely Mid-Godly), Abstract Existence (Type 2, Aristotelean), Possession, Genius Intelligence, Vehicular Mastery, Technology Manipulation, Non-Physical Interaction, Hacking (able to hack the Borg Tower's computers and the Digiverse), Golden Power and Energy Absorption (thanks to his technology, the Digital Overlord is able to absorb Golden Power and Energy, making itself and his machines stronger), Creation and Power Absorption (the Digital Overlord is able to Absorb Lloyd Garmadon's powers to create a new body. naturally, this new body has all of the Ultimate Spinjitzu Master's powers), Data Manipulation, Information Manipulation and Analysis, Flight, Energy Projection and Heat Vision (with the Nindroid Warriors and other machines and technologies, which the Digital Overlord can possess if he wants to), Reality Warping, Spatial Manipulation, Gravity Manipulation and Size Manipulation (within the Digiverse, the Digital Overlord has an exat map of New Ninjago City, that he can manipulate at will, changing the way it looks and even its gravity), Astral Projection (the Digital Overlord can make a projection of himself inside of the Digiverse, the he can use to communicate and even to fight when he's elsewhere), Mind Manipulation and Cyborgization (enslaved Cyrus Borg and added him mehcanical parts), Extrasensory Perception

Range: Dozens of meters with his powers. Likely Planetary with the Garmatron (with the Garmatron, he was able to launch missiles from the Dark Island all over Ninjago), Universal+ with Shadows (Possesses Lord Garmadon, who has the ability to manifest Animated Shadows on Ninjago to fight even when he was trapped in the Underworld, another Dimension parallel to Ninjago | Planetary (in this form, he was able to affect the entire planet, both in the battle against the First Spinjitzu Master, and when mind-controlling all of Ninjago's inhabitants), Universal+ with Shadows | Dozens to hundreds of meters with his technologies individually, tens of kilometers in total and in the Digiverse (ale to control all of New Ninjago City and all of its technologies from the Digiverse, which had a digital map of the entire city inside of it) |at least Planetary, likely Universal+ (has the same powers as the First Spinjitzu Master, who created the entire Realm of Ninjago), Universal+ with multiple abilities.

Intelligence: Extraordinary Genius: the Overlord is an extremely ancient being, that is very knowledgeable about Darkness and Evil, as well as the Balance itself. He created the invulnerable Stone Army, which was unaffected by the First Spinjitzu Master's powers until the latter used the Elemental Blade, as well as various other war machines and weapons. He predicted Lord Garmadon's arrival to the Dark Island, and the final battle, planning how to conquer Ninjago for thousands of years. He tricked and manipulated Lord Garmadon into helping him at taking over Ninjago. After being defeated by Lloyd Garmadon, he entered inside the Borg Tower's computer and hacked and completely took over the Digiverse, an entirely digital realm that expands throughout all of New Ninjago City, and is connected to all of its technologies. He wasn't outsmarted by Cyrus Borg and created an entire army of Nindroid Warriors using Zane's project. He also created technologies and devices to extract and absorb Golden Power, even directly from Lloyd Garmadon, and used this power to create a new body with all the latter's and the First Spinjitzu Master's powers. He even used the Golden Weapons and the Megaweapon to create a giant Golden Spider-Mech from himself.

Weaknesses: Golden Power is the Overlord's main weakness: it can easily match, if not overpower his Darkness, and can completely nullify the properties of Dark Matter. While he is extremely hard to get rid off, the Overlord cannot regenerate his body, and he needs a body or vessel to actually fight: because of this, he can be potentially expelled from a body (by its destruction or by directly removing him from it) and/or sealed (check Note for more info). After transforming into his True Form, he may lose the Helmet of Shadows: if another person wears it, the latter will take full control of the Stone Army.

The Overlord emerges from Ninjago

The Overlord creates the Stone Army

The Golden Master's rise as told by the Serpentines' legends.

The Golden Master moments after having gained his new body.

The Golden master's Spinjitzu
Add a photo to this gallery

Start a Discussion Discussions about The Overlord (Ninjago)