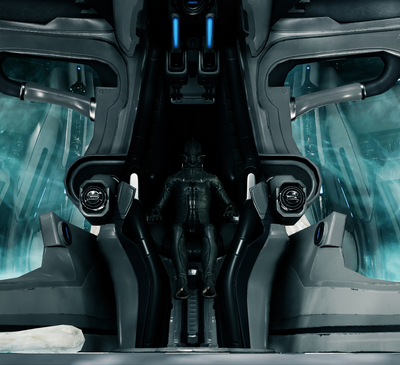 Before the current events of Warframe, an Orokin ship dubbed the Zariman Ten Zero became involved in a horrific void jump accident which had plunged it into a chaotic sub-dimensional space known as the Void.

Years later, the ship had reemerged and was recovered, the only survivors being children that had been exposed to Void energies that had twisted and changed them, they had gained inexplicable powers and abilities, which led them to be feared by the public and were of great interest to their Orokin masters.

Experiments were made to harness the children's powers, it was when a breakthrough with an Orokin researcher named Margulis that they realized that they can harness their powers through dreams. Through a process called Transference; the children's abilities can be remotely channeled through a surrogate body, a Warframe. It was through these children's powers that the Orokin could combat the Sentients during the Old War before their society's collapse.

Superhuman strength, speed, durability and agility, Immortality (Type 4 and 8. Due to being exposed to the void, The Operators have Oro, which grants them immortality and resurrection for as long as they possess it), Energy Manipulation, Energy Projection, can resurrect allies, Weapon Mastery, multiple element manipulation, Mind Manipulation, Mind Control, Telepathy Technology Manipulation/Clairvoyance via Transference, Body Puppetry via Transference, Avatar Creation (Can project a copy of himself made out of void energy to fight alongside the warframes), can create Forcefield, Healing, Magnetism Manipulation, can cause paralysis, Invisibility, can cause Petrification, Acid Manipulation, Resistance Negation through Void Energy (Void Energy is a form of energy that even the sentients could not adapt to, moreover it also strips them of all their current adaptations and resistances), possible Longevity, Invulnerability, Teleportation, Absorption and Sealing (Sealed and contained TMiTW within his own body), Transference is unaffected by time difference (Even when the operator was in the past he could still keep up Transference keeping the Warframe functional), Possession (Possessed Umbra who, unlike other warframes, has a mind and consciousness), Non-Physical Interaction (They can freely physically interact with elements, energy, and through the use of void energy they can even interact with souls), Resistance to Mind Manipulation, Soul Manipulation, Corruption, Possession, Body Puppetry (Contains The Man in the Wall who is the embodiment of the Void energy, an alien energy across the entire universe coming from an inter-dimensional space called The Void)

Same as before except for Avatar Creation in addition to Immortality (Type 2, 3, 8 and 9 They are made avatars made of pure void energy and as such they lack biological parts, can regenerate and are depended on their true self), Regeneration (Unknown, can always come back due to the link with their true self), Likely Immunity to Mind Manipulation and Soul Manipulation (They are solely controlled by the operator through void energy and lack a mind, soul and consciousness)

Invulnerability (Through various abilities and mods the warframes are capable of full invulnerability to any kind of damage, ability or status effect), Aura, Statistics Reduction (Damage, shield, armor, speed, accuracy and more), Statistics Amplification (Damage, shield, health, armor, strength, speed and more), Limited Probability Manipulation (Capable of increasing the chances of status effects), Extrasensory Perception, Reactive Power Level (Increasing energy), Healing, Power Bestowal, Elemental Manipulation (all elements in addition to corrosive, magnetic, poison, blast etc), Statistics Amplification, Damage Boost and Damage Reduction (All to insane amounts. Capable of increasing their damage several thousand times over, this boost can sometimes even go in the millions or billions. Capable of reducing all incoming damage which includes several stacking mods capable of easily going over 99% damage reduction even without a specific build or abilities), Electricity Manipulation (Shocks anyone who makes contact with the warframe), limited Probability Manipulation (Can increase the chance for certain events to happen such as inducing status effects, critical chances, enemy detection chance, the chance to be unaffected by a knockdown, each of them capable of going to 100% chance), Passively Reflects all incoming damage to the attacker, Adaptation (Warframes grow extreme resistances to whatever is used against them through various mods. This extends to most status effects, damage and/or sometimes even durability negating weapons), minor Mind Manipulation (Can gather the attention of any enemy when blocking), Teleportation

Attack Potency: Unknown (The Warframes act as restraints on their power) | Unknown (They are likely comparable to their true selves) | At least Small Town level+, likely Small Country level (Comparable to the likes of Inaros who was capable of performing this feat), possibly higher

Range: Low Multiversal (When manipulating the energy of the void the operators can keep connection with the warframes and can affect them even when one of them is in the rift, furthermore the Void Energy comes from another dimension), Transferrence keeps the link throughout time | Hundreds of meters through energy projections | Extended melee range; can be extended to a certain amount with mods, hundreds of meters with most ranged weaponry. Varies, cross universal with most abilities.

Standard Equipment: None notable | None Notable | Various types of Grineer, Corpus, Infested, and Tenno weaponry, but is limited to one large weapon, a sidearm, and a melee weapon at a time during missions. Several Sentinels, Archwings and other equipment.

Intelligence: Extraordinary genius, likely higher (Has extensive combat knowledge from the Old War, has mastered every form of weaponry and is capable of hacking into advanced computer systems and retrieving deeply buried information within seconds)| Mindless (The projection is incapable of thinking or acting without the true form dictating it's moves) | Mindless (Their thought processes are entirely based on the operator).

Weaknesses: Their uncontrolled powers could potentially harm themselves | None Notable | Advanced, concentrated EMPs can restrict the use of his powers.

The Operator has a set of unique abilities, abilities that come due to his existence being exposed to the void and then mastering control of the void. The abilities are as follow:

Each school has unique abilities which The Operator can use, for info check here.

Defensive Mods: These mods are capable of increasing the effective defense not through increasing durability but rather through trickery. Some mods are capable of giving warframes the ability to passively electricute anything that comes close to them, paralyzing them in the process, while some others make the warframes passively reflect all incoming damage to the attacker.

Shade: A sentinel capable of making its master invisible whenever there is an enemy around, attack and even increase its owner's damage.

Helios: A sentinel that specialises in analyzing everything about an opponent. Deducing its weak points and strong points with a mere scan, it can also show the body weak points of any suit or physical body.

Diriga: A sentinel specialising in sniping opponents from a distance, dealing massive damage sometimes even comparable to the warframe or weapons. It is also capable of continuously zapping targets paralyzing them.

Amesha: An Archwing that focuses on defense and healing rather than offense. Its abilities include Homing Attack Negation (Deploys drones that intercept all enemy fire), Absorption and Healing (Creates beacons that absorb all damage and turn it into healing pulses instead), Heat Manipulation and Resistance to Status Effect Inducement (Makes every member of the team immune to status effects and slows down enemies), Empowerment (Absorbs all incoming damage and turns it into energy, furthermore every ability gets enhanced stats like range, duration and power).

Elytron: An Archwing focusing on offense. Its abilities include launching bullets, missiles and distraction.

Specters: Specters are exact replicas of something. Specters can be used to fight alongside the warframes, and can be replicas of themselves or any other warframe or even replicas of enemies. Specters can be pre-made to be used in battle and creating specters of enemies will allow the specter to copy its entire arsenal and use all of his powers, however creating specters of enemies would require full information regarding that specter, information that can only be acquired through scanners.

Due to controlling the warframes from afar The Operator has access and can utlize all warframes, and as such all their abilities. Due to the ability to change bodies and warframes the operators can utilize all the powers of

Including all their passive effects, augments and traits.

Start a Discussion Discussions about The Operator