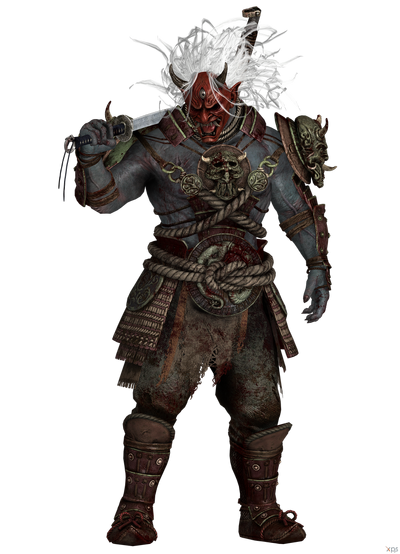 Honoring his family name was never enough for Kazan Yamaoka. He wanted to surpass his father's reputation and end what he saw as the thinning of samurai culture with farmers often posing as samurai. His father tried to turn Kazan's attention to more noble pursuits, but Kazan refused to heed his advice, and borrowing his father's Katana, he embarked on a dark pilgrimage to prove his worth and rid Japan of impostors. Ignoring the code that had been taught to him, Kazan killed impostors in the hills and the valleys, on the beaches and in the woodland. The killings were brutal, cruel and morbid. He humiliated farmers and warriors alike, yanking off their topknots and stripping them of their armor. His rage, bloodlust and perverse sense of honor knew no bounds. Monks believed he was possessed by something dark and otherworldly and cursed him while a noble lord began to call him Oni-Yamaoka, the rageful Samurai, an insult both to Kazan and his family.

Determined to redeem his family's name, Kazan now butchered anyone who dared call him Oni-Yamaoka. The insult confused him. He had defeated the best and he had purified the samurai class by ridding the land of impostors. How could anyone refer to him as an ogre? Had it been because he had marched onto a battlefield to cut down the fiercest warriors. Had it been because he had taken a Kanabo and dashed hundreds of skulls with it? Or had it been because of his need to secure a ‘trophy’ from his victims? It didn’t matter. Being called an ogre was more than he could bear and an ominous voice in his head urged him to strike down the lord who had desecrated his name.

As Kazan made for the lord’s town, he suddenly found himself face to face with a samurai standing on a dirt road, blocking his way. Kazan readied his Kanabo. Without a word, the samurai attacked and quickly secured the upper hand. But he hesitated. With a devastating blow, Kazan crushed the samurai’s head and cracked his helmet. As Kazan approached the fallen samurai, he saw his father’s face and staggered back to his haunches. His father stared at Kazan with mingled shame and regret as he issued his last breath. Kazan closed his eyes and screamed in agony until he could scream no more. When he opened his eyes again… his father was gone. Not only had he killed his father, but he had allowed thieves to steal his body for armor.

Bitter, lost and disillusioned, Kazan roamed the land aimlessly with his father’s voice rattling in his head, taunting him, reminding him of his failures, sending him into fits of uncontrollable black rage. One day, walking in the woods, Kazan happened upon an Oni statue. He stopped and stood motionless for a long moment. The weathered and overgrown statue seemed to be ridiculing him, accusing him of being the impostor samurai he had so desperately sought to destroy. Kazan shook the laughing voice out of his head and half remembered the lord who had ridiculed him as 'Oni-Yamaoka.

With renewed anger, Kazan journeyed to a town high up in the snowy mountains where the lord resided. A dozen samurai met Kazan at the gates of the town. A dozen samurai fell to his Kanabo. His speed and strength were unmatched. His rage was incomprehensible. Covered in blood and gore, Kazan battled through the town and soon found the lord hiding in a villa. He dragged him out of a cabinet, sliced his tendons to immobilize him and watched him beg and squirm like a dog. Without hesitation, he thrust his fist into the lord’s mouth and yanked out the wicked tongue that had desecrated his name.

Satisfied, Kazan exited the villa to find himself surrounded by dozens of farmers wielding rusted scythes, sharp pitchforks, and heavy clubs. He survived the first few assaults, but there were too many attackers coming from every direction. Within moments Kazan was on the ground staring at a cold, indifferent, darkening sky as farmers took turns stabbing and torturing the 'Oni' who had butchered their beloved lord. The frenzied mob dragged Kazan into a small stone mill to continue the torture and finally left him to die a slow, agonizing death. When they returned, the mill was filled with a strange black fog and Kazan’s body and the Kanabo were nowhere to be found. It was the beginning of a dark legend about a rageful Oni haunting the town.

Powers and Abilities: Superhuman Physical Characteristics, Weapon Mastery, passive Fear Aura via The Heartbeat (The very presence of a killer is enough to incite panic, severe anxiety, and terror. Amplified through proximity.), Stealth Mastery (The Killers possess natural stalking ability and can mask The Heartbeat), Enhanced Senses (A Killer's senses are so acute that they can detect minor disturbances in terrain as a trail to their target alongside their ability to detect the smell of blood and sound of breathing from great distances), Extrasensory Perception (Killers are able to see the auras of those bleeding out or attempting to heal their wounds), Immortality (Types 1 & 8; Killers have an importance of collecting food for The Entity, and will be resurrected by it should they be killed), Berserk Mode and Speed Boost (should the lust for the kill become too great, the Entity's connection to the Killer will be cut off, making them unpredictable), Blessed (The Entity favors the Killer's and will aid through indirect means should it be beneficial), Empowerment (via No One Escapes Death; the attacks motivated through this hex are more lethal, making strikes that would only injure become critically lethal), Summoning (via Hooking; exists as a sacrificial ritual to The Entity, awakening it to take the soul of the victim. As well, Cruel Limits, Thrilling Tremors, and Corrupt Intervention among others all summon the spikes and arms of the entity to meddle with generators and block off escapes), Status Effect Inducement (Hemorrhage and Mangled; provokes intense bleeding and slows down the process of healing respectively), Technology Manipulation (Surge, among other perks meddle with nearby technology. Surge, specifically, is said to charge the air and mess with tech), Statistics Reduction (Mindbreaker claims that “your distressing presence drains and weakens your prey” and “can evoke feelings of dread and fatigue in nearby individuals,” alongside causing exhaustion in-game), minor Perception Manipulation (via Huntress Lullaby; those who are hooked find their perceptions muddled), Power Nullification (via The Third Seal; negates Extrasensory Perception through the Blindness effect), Resistance to Pain (Enduring) and Blinding (Lightborn), Transformation (The Oni's Demon Mode allows him to transform into a Brutal Demon. However, The Oni needs to absorb blood of his prey to transform), Blood Manipulation, Absorption (Can absorb the blood of his prey)

Attack Potency: Wall level (Comparable to The Nurse, who could casually destroy barricades by poking them) | Wall level (Stronger than before)

Speed: Superhuman (Killers possess the speed to outpace trained athletes in a fearful run by simply walking after them)

Intelligence: High (In his lore, has "defeated the best and he had purified the samurai class by ridding the land of impostors."), Knowledgeable and skilled with his Katana.

Weaknesses: Killers are servants of the Entity, making them more prone to preserve their prey first in an attempt to sacrifice them. The Stain is an indication of where killers are looking, making their line of sight more exploitable. Kazan gets enraged and butchers anyone who would call him "Oni-Yamaoka". This "Insult" confused him