VS Battles Wiki
Register
Don't have an account?
Sign In
Advertisement
in: Characters, Marvel Comics, Cosmic Entities,
and 19 more

The One Above All 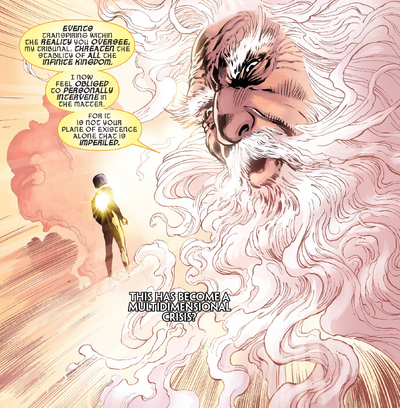 The One Above All (Also referred to as Above All Others) is the supreme being of Marvel Comics, as well as the superior of the cosmic judge known as The Living Tribunal. Having very few mentions and even fewer appearances, The One Above All has very rarely interfered directly in the events of any Marvel comic, only ever doing so with a conversation with Peter Parker, when reviving Ben Grimm, and by saving Eternity from The First Firmament.

Name: The One Above All, Above All Others, God

Gender: Inapplicable. Is perceived as both male and female, as it is, in fact, all things

Attack Potency: Outerverse level (He is the Supreme Creator of the "Omniverse," i.e. everything in Marvel Comics, and is immensely greater in power than all other characters combined, as they are all extensions of himself. Has been called "The author of all that is." Marvel Comics has outerversal characters such as Oblivion, and has shown realms / locations beyond all dimensional space) | Likely Outerverse level (Stated to exist beyond all space and time, but stated that it was unable to stop the imbalance to the multiverse caused by Thanos wielding a regulator, and was absorbed when the latter used it against itself)

Intelligence: Nigh-Omniscient (As the creator of the Marvel multiverse, The OAA holds virtually all knowledge regarding its nature, but can be intrigued by mysteries, such as worldbuilding and how future events will play out. Should be more knowledgeable than The Living Tribunal, whose three visages see past, present and future, letting him "know all".) | Nigh-Omniscient

Weaknesses: None | Somebody seizing control of the regulators placed in individual universes

Do not attempt to scale The Above All Others to other mainstream Marvel characters. The only story The Above All Others appeared in severely and repeatedly contradicts the canon of not only Universe 616 but the entire Marvel multiverse, and it seems to be ignored by every other writer and narrative.

Marvel's first mention of the existence of a Supreme God, in Fantastic Four #72

Eternity explains that neither it nor its sibling Death are God, for while they encompass the universe, God rules all universes, in Doctor Strange #13

Thor talks about the Multiverse's cosmic hierarchy, and how God must be immensely higher than all his creations combined, in Thor Annual #14

First comicbook mention of The Living Tribunal being merely the servant of an even higher being, in Fantastic Four Annual #23

The Living Tribunal explains that his authority "Comes from on high.", in Warlock and the Infinity Watch #1

First comicbook usage of the title "The One Above All", in The Infinity War #2

The Protege attempted to gain absolute power and become the new One Above All, in Guardians of the Galaxy #50

Odin mentions the existence of a supreme God, in Thor Annual #2000

The first physical appearance of The One Above All, talking with Peter Parker in The Sensational Spider-Man #40

Mephisto explains that The Living Tribunal isn't God, but merely "The biggest kid in all the playgrounds. And if he knows the Principal, he's not exactly chatty about it.", in Journey into Mystery #627

Becca Steinhardt prayed to the "Creator of all Gods and Men", saving her's and Thor's lives from the deity known as Glory, in Chaos War - Thor #2

Thanos and Adam Warlock meet with Above All Others in a realm beyond all time and space, in Thanos: The Infinity Finale

What is likely The One Above All takes the guise of a bald parrot and confronts Dimitrios in a void beyond reality, letting him know that 10,000 years in the past, his plan has already failed.

Above All Others explaining about the regulators to the Living Tribunal.

Above All Others confronting Thanos with The Astral Regulator. From the Thanos Infinity Ending Storyline.