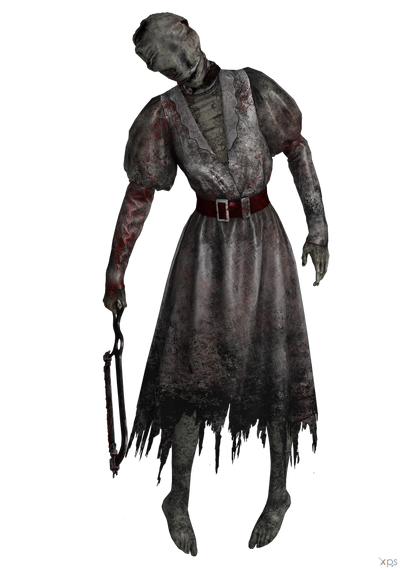 Sally Smithson came to town with dreams of children’s feet and laughter in a wooden home built by her husband Andrew. But life came not with smiles but with plans of destruction. Andrew worked as a lumberjack - a job with its perils. And one day Andrew’s foreman had to visit Sally, forever changing her life. She was alone. Without food on the table, the only employment she could get was at the Crotus Prenn Asylum. Nobody sought employment there unless they were in dire need. Just like Sally. Without any education, she started at the bottom and after two decades she hadn’t progressed any closer to the top. Instead, her mind had reached its limits. Two decades of seeing horrid things that violated the eyes. Memories that are re-played every night. Being abused verbally and physically, by people without limits. Sally saw insanity from the outside, just to catch it herself. Finally, she could not take it anymore and concepts of purification emerged inside her. She did what she felt was necessary. As the morning staff arrived one day in September - they found over fifty dead patients, lifeless, in their bed. Sally was the only one at the scene, rocking back and forth. Exactly what happened is only known by her, but it seems that some of them had been choked as they had marks around their necks.

Powers and Abilities: Superhuman Physical Characteristics, Weapon Mastery, passive Fear Aura via The Heartbeat (The very presence of a killer is enough to incite panic, severe anxiety, and terror. Amplified through proximity.), Stealth Mastery (The Killers possess natural stalking ability and can mask The Heartbeat), Enhanced Senses (A Killer's senses are so acute that they can detect minor disturbances in terrain as a trail to their target alongside their ability to detect the smell of blood and sound of breathing from great distances), Extrasensory Perception (Killers are able to see the auras of those bleeding out or attempting to heal their wounds), Immortality (Types 1 & 8; Killers have an importance of collecting food for The Entity, and will be resurrected by it should they be killed), Berserk Mode and Speed Boost (should the lust for the kill become too great, the Entity's connection to the Killer will be cut off, making them unpredictable), Blessed (The Entity favors the Killer's and will aid through indirect means should it be beneficial), Empowerment (via No One Escapes Death; the attacks motivated through this hex are more lethal, making strikes that would only injure become critically lethal), Summoning (via Hooking; exists as a sacrificial ritual to The Entity, awakening it to take the soul of the victim. As well, Cruel Limits, Thrilling Tremors, and Corrupt Intervention among others all summon the spikes and arms of the entity to meddle with generators and block off escapes), Status Effect Inducement (Hemorrhage and Mangled; provokes intense bleeding and slows down the process of healing respectively), Technology Manipulation (Surge, among other perks meddle with nearby technology. Surge, specifically, is said to charge the air and mess with tech), Statistics Reduction (Mindbreaker claims that “your distressing presence drains and weakens your prey” and “can evoke feelings of dread and fatigue in nearby individuals,” alongside causing exhaustion in-game), minor Perception Manipulation (via Huntress Lullaby; those who are hooked find their perceptions muddled), Power Nullification (via The Third Seal; negates Extrasensory Perception through the Blindness effect), Resistance to Pain (Enduring) and Blinding (Lightborn), Spencer's Last Breath (Teleportation, Intangibility, Telekinesis, Dimensional Travel), Levitation, possible Soul Manipulation (via Stealing Breath; the Last Breath serves as Sally's method of piercing and jumping through the Spirit World, indicating some sort of connection to souls)

Speed: Superhuman (Killers possess the speed to outpace trained athletes in a fearful run by simply walking after them)

Stamina: High (Endured being tortured and mutilated by the Entity in its attempt to make her bow to its whim for an unknown period, spends the aftermath of Trials stalking their prey at the Campfire, indicating the lack of need for rest)

Range: Extended melee range with her Bonesaw, dozens of meters with Teleportation

Intelligence: Low (Despite being a skilled killer, her experiences at Crotus Penn Asylum rendered her clinically insane)

Weaknesses: Killers are servants of the Entity, making them more prone to preserve their prey first in an attempt to sacrifice them. The Stain is an indication of where killers are looking, making their line of sight more exploitable. Sally herself suffers from Stridor. Utilizing the Last Breath is a painful process for her and leaves her with fatigue.