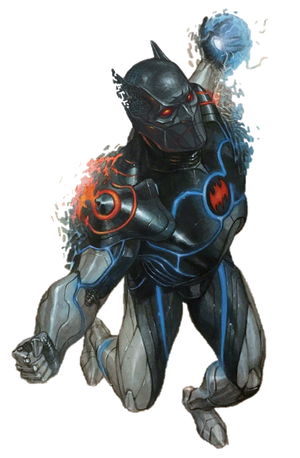 On Earth -44, several villains of Batman found their way into the Batcave. There, they found his loyal butler and surrogate parental figure, Alfred Pennyworth. They brutally assaulted and interrogated Alfred, demanding to know where Batman was. Loyal to the end, Alfred denied even knowing what a 'Batman' was. Ultimately, Alfred was beaten to death.

In grief, Batman reached out to Cyborg in the hope of creating an A.I. designed using scans of Alfred's mind. However, upon activation, this A.I., dubbed the Alfred Protocol, went out of control. It began to murder all of Batman's villains, even killing every inmate in Arkham Asylum, in an attempt to protect Bruce. Despite this, the Dark Knight wanted to attempt to fix the rogue A.I., unable to bear the thought of losing Alfred again. Despite Cyborg's warnings, Batman allowed the Alfred Protocol into the Batcave's systems. The A.I. assimilated and bonded with him, transforming him into a robotic being and warping his mind.

In the end, Batman would go on to kill his former friends and comrades of the Justice League, saving Cyborg for last. Cyborg attempted to appeal to Batman's humanity, stating that he didn't have to be a "Murder Machine". Sadly, it was all in vain and the newly dubbed Murder Machine killed Cyborg. He would later be recruited for Barbatos' Dark Knights for an invasion of the Multiverse.

Speed: Massively FTL+ (Capable of keeping up with his universe's entire Justice League at once)

Lifting Strength: Possibly Class G (Capable of restraining multiple Justice League members, including Wonder Woman and Aquaman at the same time. Tore off the head of his universe's Cyborg)

Stamina: Should be Extremely High due to his robotic nature

Intelligence: Should be comparable to his Earth-0 counterpart. Capable of hacking and understanding Cyborg's advanced technological systems and bending them to his own use.

Weaknesses: As a robotic being/A.I., Murder Machine can be hacked, disabling him until his systems recover. Due to the Dark Multiverse's citizens vibrating at an opposite frequency to Nth Metal, his body is badly damaged upon contact with it, and can also be heavily injured or even killed by large amounts of positive energy.

Start a Discussion Discussions about The Murder Machine