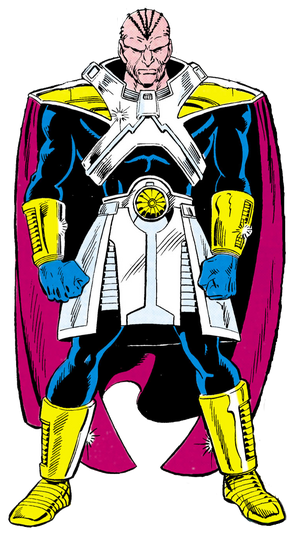 The Monitor, also known as the Over-Monitor, real name Mar Novu, is one of the three sons of Perpetua, created when she tore pieces from the Overvoid to shape into her children. He existed before the first version of the DC Multiverse was finished being created, and was made in order to monitor all positive matter universes that successfully rose from the Dark Multiverse. He is tied to Creation, and reforms after dying within it. The Monitor's infamous war with his brother, the Anti-Monitor, began when the former helped cause the Source Wall to be created, knowingly ensuring the Anti-Monitor's realm would lose its purpose.

Age: 20 billion years from the perspective of the multiverse; exists completely beyond time

Classification: Guardian of the Multiverse, Son of Perpetua, Cosmic Seer

Superhuman Physical Characteristics, Genius Intelligence, Immortality (Types 1 and 4), Clairvoyance (Can peer into time), Self-Sustenance (Types 1, 2, and 3), Forcefield Creation (Made a barrier to block Psimon's blast), Energy Manipulation (Can make energy globes that allow him to view things across dimensions), Energy Projection (Can fire energy blasts), Power Bestowal (Was the one who cursed Pariah with immortality and an attraction to catastrophe), Pocket Reality Manipulation, Space-Time Manipulation and Absorption (Created a netherverse which absorbed two universes), Empowerment (Is empowered by all positive matter), Creation (Can create objects with his mind), Empathic Manipulation (Calmed the populace in his netherverse), Law Manipulation (Wields the Dimensional Superstructure, which governs all things imaginable and unimaginable), all the Monitors' abilities like Flight, Aura (Can release a damaging energy aura in all directions), Time Stop (Can stop time using chrono-paralyzers), Teleportation (Can teleport themselves and others across dimensions), BFR (Can forcefully teleport others away), Telepathy (Can sense others' hearts), Perception Manipulation (Can go unnoticed by others), Sleep Manipulation (Can put others to sleep), Limited Fusionism (Merged with his brothers), Enhanced Senses (Has sensed Perpetua launching a planet from Earth-44), Resistance to Antimatter Manipulation (He and his brothers can avoid being destroyed by antimatter)

All previous abilities to a much greater degree, plus: Abstract Existence (Type 1), Beyond-Dimensional Existence (Type 2), Large Size (Type 11), Non-Corporeal, Intangibility, Immortality (Type 10), Transduality, Conceptual Manipulation (Type 1), Regeneration (Mid-Godly - Reformed after all his fragments were erased from existence except Nix Uotan, who still remains), Size Manipulation and Dimensional Travel (Can alter both his scale and pitch to enter lower dimensions and traverse the Multiverse)

Attack Potency: Multiverse level+ (Stalemated the Anti-Monitor in a clash that rendered both unconscious. Energy from infinite positive matter universes flows through him to give him power, but he lacks the power to shape it) | Outerverse level (Is a direct fragment of the Overvoid, created by tearing a piece of it from the whole. Exists in the Sixth Dimension, a timeless realm beyond imagination and is at the top of everything even the Source Wall)

Durability: Multiverse level+ (Should be equal to his own power) | Outerverse level

Stamina: Infinite (Draws energy from infinite universes of positive matter and kept fighting the Anti-Monitor for one million years until he was knocked unconscious)

Intelligence: Supergenius (Built Multiversal tuning forks, devices that, once powered by his energy, were able to merge universes together, synthesizing their timelines. Also built a device capable of contacting the Judges of the Source, located somewhere in the Void)

Weaknesses: In his lower-dimensional state, Mar Novu is tied to all positive matter universes within the multiverse. Destroying these universes greatly weakens him due to the balance of matter and antimatter shifting in favor of his brother, the Anti-Monitor.