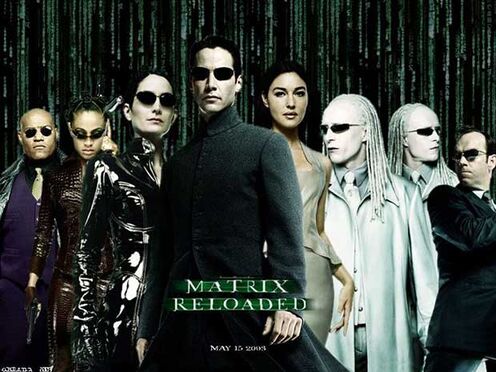 For detailed information about this series, visit The Matrix Wiki.

The Matrix is a trilogy of films created by the Wachowski Brothers. The films spun off to include the animated short The Animatrix, comic books, and video games.

The films follow Neo, a man who starts off as a man unable to piece together what's wrong with the world, awakening later on to become The One- who will supposedly free Humanity from the artificial world of The Matrix and the domination of the sentient machines that have come to dominate the world.

The Matrix is a sci-fi universe that features mainly Wall level to Large Island level characters (inside the Matrix) and Average Human level to Wall level characters when outside of the Matrix, along with hordes of sentient machines that use comparable technology to today. In the terms of Speed the verse range from Human Level to Massively Hypersonic and with a recent calculation The Matrix exceeds the speed of lightning.

Overall, The Matrix beats most fictions set in a contemporary setting. Inside The Matrix, the characters will most likely defeat peak humans with futuristic technological enhancements. The series' most powerful character by far is The Architect, an AI with absolute control of The Matrix' reality, and also its creator.