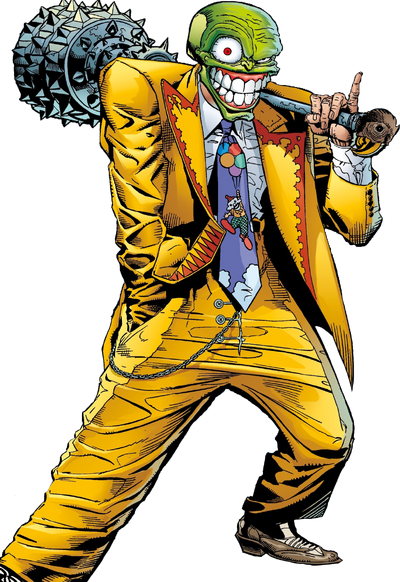 The Mask, also known as Big Head, is the anti-hero/villain protagonist of the Dark Horse comic book series The Mask. The story initially revolves around a magical mask which gives any wearer limitless power and an altered appearance, characterized by a large set of teeth and an enlarged, green-colored head. The mask affects the personality of the wearer by removing all personal social inhibitions, causing the wearer to become insane. In the original comic stories, characters who wore the Mask would become dangerous and cruel antiheroes with ultraviolent tendencies, even if this was not the wearer's original intention.

Name: The Mask, "Big Head", any other names possessed by the current wearer

Classification: Unknown (Though the wearers themselves are human)

Powers and Abilities: Superhuman Physical Characteristics, Weapon Mastery, Immortality (Type 3), Regeneration (Low-High), Toon Force, Teleportation, Flight, Pocket Reality Manipulation (Can produce almost any desired object seemingly out of nowhere), Shapeshifting (Can take the form of other individuals, as well as materialize new clothes and develop new physical features), Transmutation (Transformed a balloon animal into a submachine gun. Turned a cigarette into a bomb. Transfigured a sniper scope into a kaleidoscope. Turned his own fingerprints into pictures of Halloween characters), Sound Manipulation, Electricity Manipulation (Requires an outside source of electricity), Summoning (Called forth a small army of beings in a fight with Walter), minor Physics Manipulation (Completely halted a freefall), Reality Warping, Breaking the Fourth Wall, high Resistance to pain, Invulnerability (The Mask itself is indestructible, and as it fuses with the wearer's head, it protects them and ensures their head will survive even if the rest of their body is destroyed) | All previous abilities greatly enhanced, as well as Immortality (Type 2), Magnetism Manipulation (via a giant magnet) and Resistance to poison

Attack Potency: At least Wall level (Stanley Ipkiss destroyed part of an apartment complex with a rocket launcher. Users can damage those who harm them), likely Small Building level (Nunzio unleashed an explosion of this size. Ben collapsed a concert stage with a scream) | City Block level (General Blaire was able to fight someone who withstood this)

Speed: Supersonic+ (Lieutenant Kellaway casually dodged shotgun blasts at point-blank range. Nunzio did this before a group of armed men could react. Rick could move fast enough to cause a sonic-boom) | Likely the same as before

Striking Strength: At least Wall Class (Lieutenant Kellaway cleaved through a police car with an axe), likely Small Building Class (Rick was strong enough to briefly knock himself out with a single hit) | City Block Class

Durability: At least Wall level (Kathy, one of the mask's least powerful wearers, survived being tackled through a wall, which takes this much energy. Stanley Ipkiss was unscathed by a violent car crash), likely Small Building level (Lieutenant Kellaway was completely unharmed by this. Nunzio tanked his own explosion at point-blank range). Regeneration makes each wearer difficult to kill | City Block level. (Emily Tuttle withstood this with no damage. General Blaire was able to catch a falling building). Unknown for The Mask itself (Nothing has been shown to be able to destroy it). Regeneration and Invulnerability make each wearer difficult to kill

Stamina: Varies. Weaker wearers have shown to tire after extended periods of time and can be incapacitated by severe enough injuries, whereas most other wearers don't seem to tire at all and remain completely unhindered by loss of limbs and destruction of organs. Rick, in particular, went on a rampage for three full days without stopping. | Vastly superhuman. All examples of lesser stamina are no longer present.

Range: Standard melee range physically. Up to dozens of meters with weapons. | Same as before.

Weaknesses: Extremely psychotic and impulsive. Possesses mediocre long-term tactical abilities, often making decisions without giving much thought to the repercussions that might follow as a result. The wearer's powers stem from the mask itself; tricking the wearer into taking off the mask will result in said wearer losing their powers.

The Thing (The Thing) The Thing's Profile (9-B forms were used, and speed was equalized)