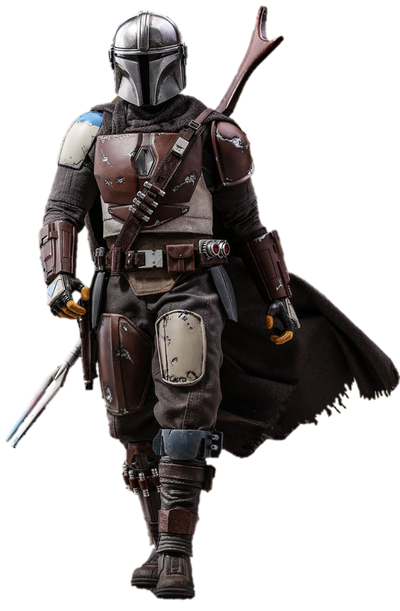 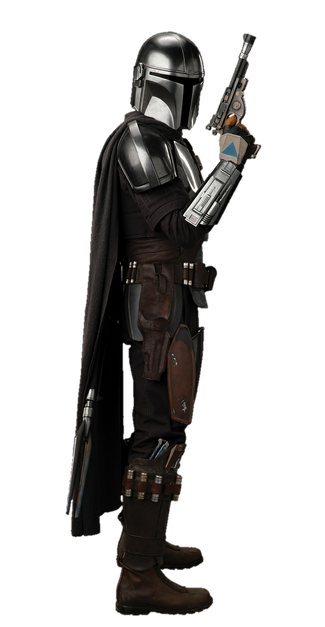 Din Djarin was a child at the time of the Clone Wars, his family was killed by droids and he was rescued by Mandalorians, who would later recruit and train him as one of their own. Years later, now known as The Mandalorian, or simply referred to as Mando by others, Din would become a mysterious bounty hunter who roamed the Outer Rim and Wild Space. He was affiliated with a Bounty Hunters' Guild run by Greef Karga. His earnings as a bounty hunter helped to support his Mandalorian Tribe, which scattered from Mandalore after a purge severely reduced their numbers.

Tier: 9-A physically. 9-A with vibroknife and blasters, High 8-C with sufficient bombs

Age: Likely in his 30s (He was already a child of several years' age during The Clone Wars. This would put him well into his 30s as of 9 ABY)

Attack Potency: Small Building level physically (Fought off three adult warriors of the same species as Bossk. One of them was strong enough to cause him visible agony with a kick to his Beskar chest plate, which is strong enough to repel blaster pistol and carbine shots; This individual was floored by the Mandalorian with a single punch). Small Building level with vibroknife (Cut through things that could take heavy blaster shots, such as the hide of a mudhorn & combat droids) and with blasters (His personal sidearm is clearly a heavy blaster pistol, given that it was able to perforate through the head armour plating of IG-11 with a single shot. His rifle is capable of outright vaporizing an adult male Trandoshan with a single shot; It should be noted that adult male Trandoshans approach Wookiees in height & weight; Yield per shot likely well over 300 Megajoules), Large Building level+ with sufficient bombs (Used 2 of them at once to blow up some parts of an Outland TIE Fighter, making it crash. Mando has several more bombs with him)

Speed: Peak Human, Superhuman reactions (Fended off three adult male Trandoshans who appeared to be of the same phenotype as Bossk), up to Subsonic+ via jetpack (Used by others to keep up with shuttles with top atmospheric speeds of 800 km/hr or more. Used by Paz Vizla to catch up to the Razor Crest, which should be even faster but was moving at unknown speeds)

Striking Strength: Small Building Class (Traded strikes with and even knocked down adult male Trandoshans strong enough to cause him visible agony via kicks to his Beskar chest plate)

Durability: Small Building level physically (Scaling from his own offensive and striking strength), Small Building level with his Beskar armor (Took a shot from IG-11's DLT-20A laser rifle. His chest plate appears to have protected him from pole-arms strong enough to take out warriors with physical prowess roughly comparable to his own. Took shots from an MK modified rifle, although mostly because of his distance from it. Took shots from blasters of Death Troopers)

Stamina: Peak Human. Did not appear to be the least bit tired after fending off and defeating three Trandoshan warriors; and it should be noted that he had been in a fierce firefight just minutes prior. Took a severe battering from a mudhorn, but still kept getting back up to continue fighting; then made his way back to the Jawas who hired him with the prize they had asked for. Ran from a AT-ST without seeming the least bit of tired.

Range: Standard melee range physically & with vibroknife. Several metres with his flamethrower & throwing vibroknife effectively. Tens of metres with his blaster pistol and fibercord whip. Hundreds of meters with flash charges & his Amban phase pulse rifle (Well over 800 metres to potentially a few kilometres; Being classified as a sniper rifle, it's range should be far superior to that of the E-11 carbine, which has Canonically showcased 800 metres effective range. Other snipers within Canon are stated to be capable of hitting targets out to 5 kilometres; His Amban phase pulse rifle, which is classified as a sniper rifle, is also potentially capable of such ranges).

Intelligence: A highly skilled and dangerous warrior who should not be taken lightly. Is adept in unarmed and armed combat. Appears capable of using any weapon put in his hands. A resourceful and cunning fighter who can subdue multiple dangerous opponents while at the same time protecting a vulnerable companion. Is a skilled pilot as well. In addition to his other qualifications, like the legends of the Mandalorians, he has shown proficient taming abilities, able to calm and tame wild beasts in minutes.

Weaknesses: While formidable, he is not perfect and can occasionally make mistakes in combat. Sufficiently powerful shots or attacks can briefly stun him. Following his Mandalorian code, he refuses to remove his helmet in front of others, even when mortally wounded and with others offering to heal him.

Mando without his helmet
Add a photo to this gallery

Frank West (Dead Rising) Frank’s Profile (Speed was equalized, High 8-C explosives were restricted, Mandalorian had the rest of his weapons, Frank was in his Exo-Suit)

Start a Discussion Discussions about The Mandalorian