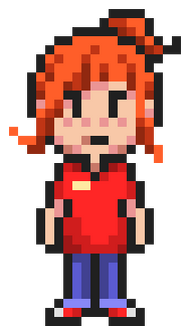 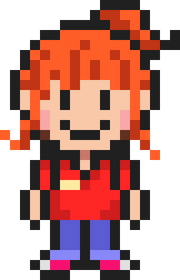 The Manager, also known as The Pizzeria Employee is a major antagonist of One Night at the Steeze and No Delivery, as well as a playable character in No Delivery and We Deliver. She is the manager of Stezzoni's Pizza and is responsible for having created many of the horrors and monsters within the pizzeria with her forbidden knowledge of necromancy.

In One Night at the Steeze she acts as a helpful merchant for the player, while in No Delivery she is the player's boss and hires them to help keep Stezzoni's Pizza running, but in both cases she is violently protective of the restaurant's secrets and isn't afraid to dispose of people who learn too much.

Name: The Manager, The Pizzeria Employee

Origin: One Night at the Steeze/No Delivery

Superhuman Physical Characteristics, Breaking the Fourth Wall (Directly addresses the player and is aware when all Certificates have been completed, even though they can't all be done in a single playthrough), Non-Physical Interaction (Can do battle with ghosts and souls, as well as hold a soul and carry it around), Soul Manipulation and Necromancy (Can claim souls of the dead, and can transpose them into new bodies to power animatronics or create monsters), likely BFR (Pink Slip's description states that it 'banishes' the target), limited Ice Manipulation (Her touch is cold enough to cause damage), Darkness Manipulation and Absorption (Her shadow can grow and reach out to a target, draining energy from them), Resistance to Mind Manipulation and Transmutation (Can resist the mind control and body mutating effect of the Kitchen Legion bag being placed on her head long enough to fight and remove it)

Attack Potency: At least Street Level (Is able to fight various pizzeria monsters that kill patrons, employees, and police officers with ease, that can survive multiple gunshots, and one of which tore the heads off of three employees during an attack), likely Wall level (Should be comparable to her employees, and even kills one of them in the Certification of Termination ending, all of which can battle The Collector and can put a hole through a mirror and the brick and mortar wall behind it as well as smash their way through a door with a single strike. Fights The Kid directly in One Night at the Steeze who should be comparable to the employees), possibly higher (One of the endings of We Deliver states that her forbidden knowledge can eventually end mankind, but the timeframe and method are unknown)

Speed: At least Average Human with possibly Subsonic (Can keep up with the monsters of the pizzeria, who have been able to evade handgun fire) to at most FTL reaction speeds (Is capable of dodging Limelight and Encore, attacks where the opponents flash the stage spotlights on them. Can keep up with monsters that can avoid shots from the Light Gun and the flash of the Disposable Camera), at least Subsonic attack speed (With her gun. The make and model is unknown, but unlikely to be any slower than this)

Lifting Strength: Likely Class 1 to Class 5 (Should be comparable to her employees who can handle being grappled by a monster who ripped the heads off of three employees)

Stamina: Likely Above Average (Can explore Wrong Turns, fight large groups of monsters at the pizzeria, and still have the energy to work a day-shift at the restaurant before returning for another night-shift to do it all again. Claims that it is as simple as 'cleaning up' the player's mess. Was able to fight The Kid on even ground)

Range: Standard melee range, several meters with thrown weapons, likely tens to hundreds of meters with her gun (the type of gun she wields is unknown, but shouldn't be less than the average)

Intelligence: Likely Above Average (Has enough of an understanding of her necromancy abilities to create a collection of monsters and has learned how to use souls to power animatronics. She very carefully guards the secrets of the pizzeria, as well as manages it well enough to stay in business. Is a generally competent fighter as well who can handle the varied collection of monsters that inhabit Stezzoni's Pizzeria)