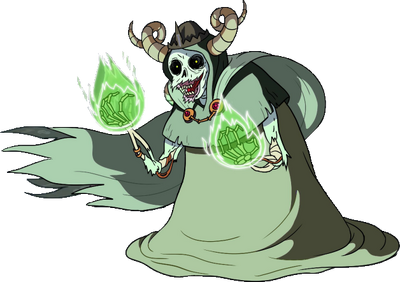 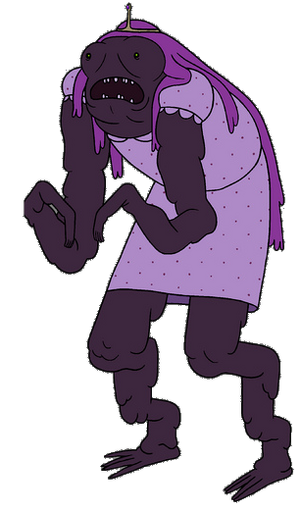 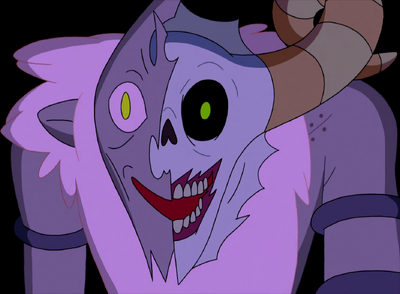 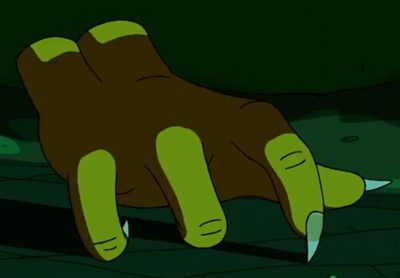 Age: Older than The Universe, Time and The Nothingness

Classification: The Lich. The Ceaseless Wheel. The King of Ruin. The Last Scholar of GOLB

Powers and Abilities: Superhuman Physical Characteristics, Immortality (Types 1, 2, 3, 6 and 7. Almost impossible to kill permanently according to P.W because he can find a new host very fast), Regeneration (At least Low-Mid), Possession, Telepathy, Mind Manipulation, Mind Control (Mind controlled Finn), Telekinesis (Can halt the movement of enemies just by talking), Time Manipulation, Time Stop (Stopped time itself during his battle with Finn), Absorption (He was absorbing the planet's life force and converting it into unholy power), Unholy Manipulation, Death Manipulation (Kills any living nearby by just passing around. His breath alone can kill. Was going to kill all life on Ooo through his power), Fear Manipulation (His powers caused a level of fear so intense that it nearly made the King of Ooo fall into insanity), Fire Manipulation, Perception Manipulation (Made The King of Ooo and Toronto view creation before Creation), Necromancy, Sleep Manipulation (Made Jake sleep with a single word), Size Manipulation, Body Control, Shapeshifting, Intangibility, Darkness Manipulation (Can control his own shadow), Sound Manipulation (He was still able to talk normally even after being reduced to a hand), Radiation Manipulation (Created a pool of radiation waste), Acausality (Type 3; Infinite Liches exist across the multiverse, one for each universe, all of whom are implied to be connected via the mind), Resistance to Transmutation and Empathic Manipulation (Was not turned into a Candy Person, nor did he undergo a sanguine personality shift, even after being within the Candy Kingdom Post-Elemental Bubblegum for an unknown, but long, period of time)

Attack Potency: At least Moon level, likely Large Planet level (He was the meteor which killed the dinosaurs. Stronger than the Citadel Guardians, who could defeat Monsters who destroyed planets. Almost destroyed all life on Ooo after the war. Was said to be able to destroy all of Ooo. As a primordial monster, he should be at least comparable to Orgalorg, who claimed he could destroy entire worlds. Matched Fern in combat), possibly far higher (Was a bringer of cosmic change in the form of a Catalyst Comet. Another Catalyst Comet had the ability to give Finn a "new mode of existence" and become with "the end, and beginning" of the universe)

Speed: At least Sub-Relativistic (Superior to Simon and Charlie), likely far higher (Should at least comparable to Orgalog)

Lifting Strength: At least Class K (Should be superior to Finn, who hurled the Evil Monster), likely Class M (Should be comparable to Orgalorg)

Durability: At least Moon level, likely Large Planet level (The Citadel Guardians were capable of beating a monster who could destroy a planet over time, and they failed to overpower him), possibly far higher. Almost impossible to kill permanently because he can still fight as a soul and find a new host (According to him, he probably survived the Big Bang that created the universe since he existed before the creation)

Standard Equipment: The Enchiridion when possessing Billy. Otherwise none.

Intelligence: Gifted. The Lich is a diabolically cunning being whose knowledge and experience seems to be shared among every Lich from alternate timelines, in which there are infinite. The Lich employs a selection of powerful magical spells and abilities into combat, most of which seem to be based around affecting the target's mind. The Lich has the ability to possess others and has the intellect to act just like the individual they're possessing, as seen in how similar his personality was to Billy's when he possessed his body.

Weaknesses: As a being of death, The Lich is deathly weak to life-based powers. This can be seen in the episode Escape from the Citadel in which a small dab of the Citadel's "healing water" completely incapacitated The Lich, causing him to devolve into a being of love (Sweet P). The Lich is a being whose primary function is to bring death and destruction, and when he is unable to kill anything, he becomes paralyzed

Note: According to the Adventure Time Encyclopedia, Hunson Abadeer admits the Lich is his only real rival.

Start a Discussion Discussions about The Lich (Adventure Time)