VS Battles Wiki
Register
Don't have an account?
Sign In
Advertisement
in: Tier 1, Tier 1-A, Tier High 1-A,
and 54 more

The Law of Identity 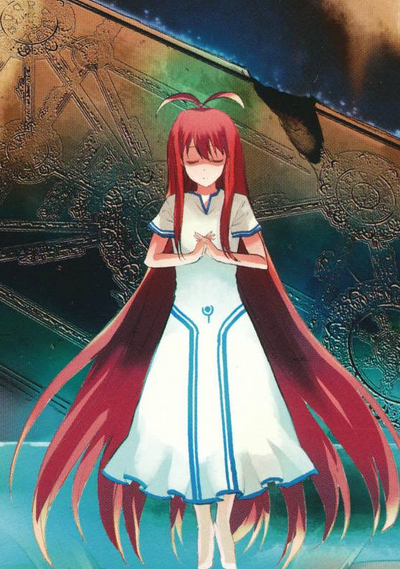 The Law of Identity is the true god of Ichiban Ushiro no Daimaou. It shares an existence with Keena Soga, but has also appeared as other people, such as Rimu Sudou, Bouichirou Yamato's guidance teacher and lover. Even though it and Keena share the same identity, their personalities, knowledge and power are vastly different.

Gender: Genderless; shares the identity of Keena, who is female

Age: Existed since the beginning, beyond linear time

Attack Potency: Outerverse level, likely High Outerverse level (The Journal stated that the Law of Identity was the only "real" thing in existence, with the totality of fiction being her mere creation, and later created the Anti-Universe after Keena perfomed the Contract of the One with Akuto Sai, leading him to being a Void Body taken into her. Stated to be able to exist infinite reality-fiction levels above everyone else despite the existence of such structure being unknown at the time)

Intelligence: Nigh-Omniscient (She has stated that there are certain things that not even she knows)

A basic explanation about the Law of Identity (Volume 12 Chapter 2):

That required thinking about the Law of Identity.

At face value, that was the undeniable principle that you were yourself.

The fact that you were the person who was thinking your thoughts could not be shaken and that had already been touched on when it came to proving the existence of the world.

But what if the world were someone’s dream?

That answer was also simple.

The world was created by the storyteller known as the Law of Identity.

Then what was the world? The world was fiction.

But at the same time, the world was an absolute truth from inside that fiction.

What if one tried viewing the world as fictional from the outside perspective?

How did the world come to be?

That one would be the one who had taken in all existence and all life.

That one would be too lonely to call a god.

They would be a truly solitary individual.

Then what was the world?

All the miscellaneous things added to the Law of Identity would be the world.

Even if the world was fictional to the Law of Identity, that fiction could be life with a will of its own.