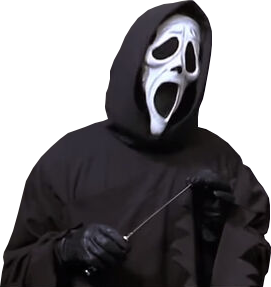 The Killer is the unnamed main antagonist in Scary Movie. He is later revealed to be Doofy Gilmore although he ends up being copied by Bobby Prinze and Ray Wilkins for a series of extended murders of their classmates in order to use the media from the murders to become famous. He is a parody of Ghostface.

Origin: Scary Movie (A parody Scream and other horror films)

Attack Potency: Street level (Decapitated Buffy with a cleaver in one slice)

Lifting Strength: Peak Human (Easily lifted Heather out of a car by the neck)

Intelligence: Above Average (Feigned mental disability as Special Officer Doofy to trick people into thinking he wasn't the killer)

The Breather (Welcome to the Game) The Breather's Profile (Both had knives, both started at the opposite sides of an apartment complex, and speed was equalized)

Start a Discussion Discussions about The Killer (Scary Movie)