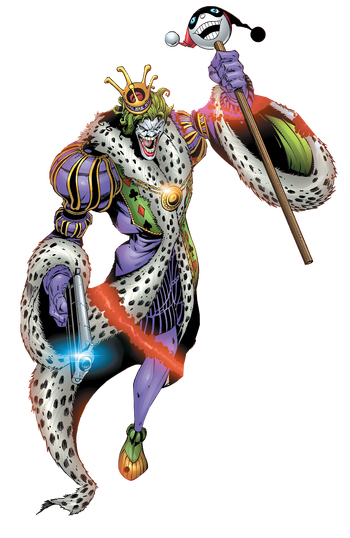 Having a mysterious yet tragic backstory, the Joker is the insane arch enemy of Batman. He's a crime lord & terrorist who believes that nothing matters. Unable to feel love for others, the Joker obsesses over the important things he deals with -- particularly Batman, whom the Joker makes his life miserable. Posing as a great actor, a charismatic person or leader, the Joker has a great talent manipulating others for his own needs or out of sheer sadism. He claims that he wants to make others see his point of view about life, but, like all nihilists, the fact that he is still alive alongside his extreme narcissism demonstrate his hypocrisy.

Tier: 9-A, higher with preparation | Initially 3-A, ultimately at least 2-A, possibly Low 1-C

Age: Probably in his 50s (Older than Batman)

As before, 4th Wall Awareness, Toon Force, Flight, Reality Manipulation, Matter Manipulation, Transmutation (Reshaped most of the universe at his image. Momentarily turned the opposing heroes into animals and Mr. Mxyzptlk into energy. Turned Harley into a constellation), Life Manipulation, Mind Manipulation & Memory Manipulation (Made almost everyone believe changes in history and changed some of their attitudes. Although, while massive, everyone was still able to remember bits of how things used to be. Got the Anti-Life Equation and used it to control Darkseid and The Spectre), Probability Manipulation (Placed Mxyzptlk's astral projection in a repeated pattern of getting a lethal accident), Clairvoyance (Observed Superman's actions through a sphere), Healing & Resurrection of others (Was repeatedly healing & reviving those he killed to keep having fun with them), Plot Manipulation (Wrote the characters he was manipulating, claimed that everything they think, say, do, feel and see is because he makes it so), Telepathy (Sees the what his controlled victims are thinking in the form of captions), Creation, Energy Manipulation, Teleportation, Biological Manipulation (Shown here), Petrification (Shown here), Immortality (Types 2 & 3), Regeneration (Mid. Healed from a hole in his head and having the having the upper part of his body shattered), Size Manipulation (Repeatedly increased his own size, and altered his and Superman's sizes in relation to celestial bodies), Immersion & BFR (Shown here), Spatial Manipulation (Shattered space), Conceptual Manipulation (Erased the colour white as a concept), Existence Erasure (Attempted to erase Batman as well), Explosion Manipulation (Blew up several Batmans he made), Telekinesis, Shapeshifting, Power Nullification, Higher-Dimensional Manipulation, Gravity Manipulation, Should have access to Mister Mxyzptlk's powers (Only demonstrated using the ones listed earlier)

Attack Potency: Small Building level+ (Has traded blows with the Dark Knight on numerous occasions but is usually depicted as being physically weaker), higher with preparation (His resources vary based on incarnation, but he has hijacked satellite lasers, nuclear bombs and other powerful equipment in the past) | Initially Universe level (Possessed 99% of Mister Mxyzptlk's power, from which he was able to utilize enough to initially reshape the universe at his image. Grows more powerful every moment by becoming more comfortable with his power. Later destroyed the universe and put it back together), ultimately at least Multiverse level+ (By destroying the universe, he would have unraveled/annihilated not just Earth and the "universe -- but everything that is, was, or will be", which is portrayed with several of the infinite Earths there are), possibly Low Complex Multiverse level (Superior to Mxyzptlk with a 1% of his power, but himself lacked major control over his power), able to ignore durability in many ways

Speed: Massively Hypersonic combat speed | Massively FTL+ combat speed and reactions (Comparable to Superman), up to Immeasurable attack speed (By unraveling everything that is, was, or will be)

Lifting Strength: At least Above Average Human (Thrown a 88 kg human, the Creeper, with ease) | Unknown

Striking Strength: Small Building Class+ (Physically weaker than Batman, but has shown incredible strength on several occasions and has proven a worthy foe in hand-to-hand combat in some incarnations) | Varies (Depends on how serious he is. Punched through Superman's chest)

Range: Standard melee range. Tens of meters depending on what weapon he is using. | Multiversal+

Standard Equipment: A deck of razor-sharp playing cards, an acid-spewing flower, cyanide pies, exploding cigars filled with nitroglycerin, harpoon guns that utilize razor-sharp BANG!-flags, and a lethally electric joy buzzer. His most prominent weapon is his Joker venom, a deadly poison that infects his victims with a ghoulish rictus grin as they die while laughing uncontrollably

Intelligence He is an insane genius. He is almost as dangerous as Batman, captured the entire Bat family and is implied to have deduced Batman's identity in the Death of the Family story arc. He has also been shown to be a terrifyingly skilled chemist, cooking up innumerable variations of his trademark Joker Toxin (such as lacing a strain with Hahnium just so that the formula would be full of "HaHaHaHaHa...")

Weaknesses: Joker has human weaknesses (however is immune to his own gas and various poisons), extreme insanity (although said psyche is so warped even avatars of the spirit of Vengeance cannot deal with it lightly and can even be an asset by making him unpredictable, he is speculated by Martian Manhunter to be a form of super-insanity as even he was unable to render Joker sane for more than a few minutes) | Didn't take anything too serious, including using his power in a way that would have kill him and the fact that he was losing his power. Despite having 99% of Mister Mxyzptlk's powers, Joker was unable to master all of it; Repeatedly showed being rather incompetent with his abilities, with enough beliefs from his victims being able to undo his alterations in reality and harm on others. Gave his enemies atrocious advantages (which may or may not be on purpose) such as don't attack them at their weakest, reviving them after killing them and writing them in a way that leads to his own defeat through simple means. His mental state slowly leads to either his own defeat or the destruction of everything, including himself, which is soon to happen at the peak of his power