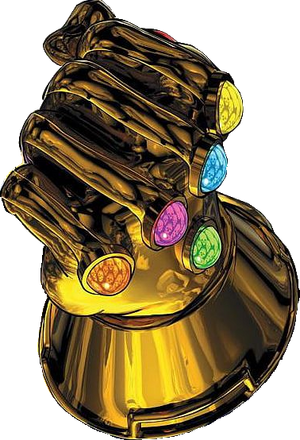 The Infinity Gauntlet is a cosmic relic of incredible power that is most frequently associated with the mad god, Thanos. The wielder is granted almost complete power over Space, Time, Energy, Souls, Minds, and the very fabric of reality itself, making it a pivotal factor in many storylines since its introduction.

Powers and Abilities: Reality Warping, Space-Time Manipulation, Mind Manipulation, Telepathy, Soul Manipulation (The Soul gem may automatically protect his user), Durability Negation, Precognition & Cosmic Awareness (Users of the gauntlet see time as a repeating loop; whereas others experience the present, the users have already lived that before several times, only allowing themselves to make unimportant mistakes. This applies to characters as fast as several abstracts and a casual The Living Tribunal. It's stated that every moment that ever was or will cascades over the user), Energy Projection & Manipulation, Physics Manipulation, Age Manipulation, Elemental Manipulation, Biological Manipulation, Explosion Manipulation, BFR, Summoning, Creation, Life & Death Manipulation, Time Stop, Size Manipulation, Portal Creation, Time Travel, Transmutation, Status Effect Inducement, Absorption, Sealing, Duplication, Soul-based Morality Manipulation, Power Bestowal, Teleportation, Cloth Manipulation, Healing, Conceptual Manipulation, Corruption, Avatar Creation, Negation (Adam used the gauntlet to negate Moondragon's telepathy, after losing the gauntlet), Technology Manipulation/Attack Reflection (Magus turned the Ultime Nullifier upon his user), Omnipresence (Magus was stated to be wherever and everything, although this isn't directly demonstrated), Matter Manipulation (Magus used it to play with, destroy and re-form atoms), Clairvoyance (Demonstrated here), Existence Erasure (Magus was going to use it to make Adam cease to be, obliterating all trace of his existence and making everyone unable to remember him due to never have existed), Body Puppetry (Magus manipulated Thanos' body), Nigh-Omniscience (The Infinity Stones were stated to grant the user Omniscience. Thanos claimed to know "all there is to know" because of his possession of the Infinity Gems)

Attack Potency: Likely Low Complex Multiverse level, possibly Higher (The Soul Stone on its own contains an entire Multiverse. Using the Gauntlet, Thanos simultaneously defeated multiple cosmic and universal abstract entities, including Death, Lord Chaos, Master Order, the Stranger, two Celestials, one of which was The One Above All, and Galactus. He also defeated Eternity with the same ease)

Speed: Immeasurable (Those armed with the Infinity Gauntlet are swifter than the Abstracts)

Weaknesses: Cannot work outside the universe it comes from (For example, the IG of 616 will not work outside of U616). The Gems can be removed, rendering the Gauntlet inert if they are somehow all displaced.

Note: While the Infinity Gauntlet is treated as merely Universal during Jonathan Hickman's Fantastic Four Run, this claim is contradicted by the Gauntlet's virtually every feat, both before and afterwards, and as such is ignored.

Retrieved from "https://vsbattles.fandom.com/wiki/The_Infinity_Gauntlet?oldid=7010110"
Community content is available under CC-BY-SA unless otherwise noted.