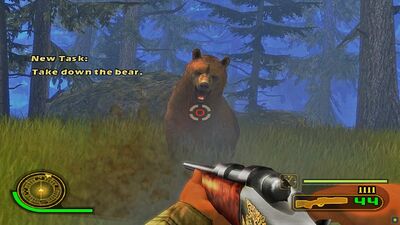 The Hunter is the unofficial name for the entity you play as in the Cabela's Dangerous Hunt 2, whom other characters like Hugh Andrews are aware of, he is is highly recognized around the world.

Tier: 9-C physically, up to 9-B with weapons

Attack Potency: Street level (Can harm animals like Cougars and wolves with physical strikes), up to Wall level with weapons (Can kill bigger animals such as crocs, rhinos or polar bears with guns)

Durability: Street level  (Can survive blows from wolves and other animals)

Intelligence: Gifted. He is an expert manager of savage animals and able to handle various types of weapons. He knows a lot about survival in nature.

Retrieved from "https://vsbattles.fandom.com/wiki/The_Hunter_(Cabela%27s_Dangerous_Hunt_2)?oldid=5293355"
Community content is available under CC-BY-SA unless otherwise noted.