For detailed information about this series, visit the Hitchhikers.

The Hitchhiker's Guide To The Galaxy is a comedy science fiction series. Originally a radio series, it extended into a six book long "trilogy", a TV series, comics, and video games. The stories largely revolve around Arthur Dent starting as a regular human and ending up traveling across the universe. It is usually considered an extremely dark satire style of comedy.

Absurdbly powerful. In addition to having an infinite multiverse, there are numerous higher dimensional beings and plenty of hax such as Morality Manipulation, Mid Godly Regeneration, Probability Manipulation, etc. Lastly, the existence of the Guide Mark II being capable of manipulating at least 22 to millions of higher dimensions makes the series one of the strongest comedy series of all time. 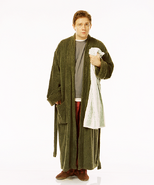 Note: Most of the profiles are composite.

Start a Discussion Discussions about The Hitchhiker's Guide To The Galaxy