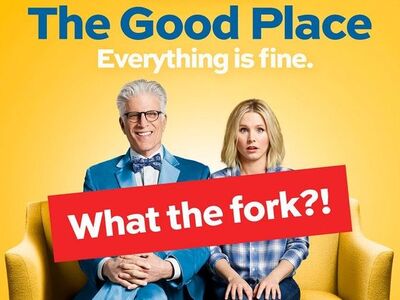 For detailed information about this series, visit the The Good Place Wiki.

The Good Place is a live action comedy/philosophical TV show made by NBC. It is about an immoral woman dying and seemingly going to "the good place", where good people go when they die, by accident. However, trouble seems afoot as the townspeople around her slowly begin to realize that she may not belong here, and instead go to "the bad place."

Immensely powerful for a live action comedy. Low level demons called "architects" can create entire universes solely to torture small groups of humans and use the concept of time as a drug in order to get high. There are characters like Janet who get stronger each time she is rebooted, and Gen who is the judge of the multiverse. There are multiple higher dimensional statements but the cosmology has yet to be fully explained.

Start a Discussion Discussions about The Good Place