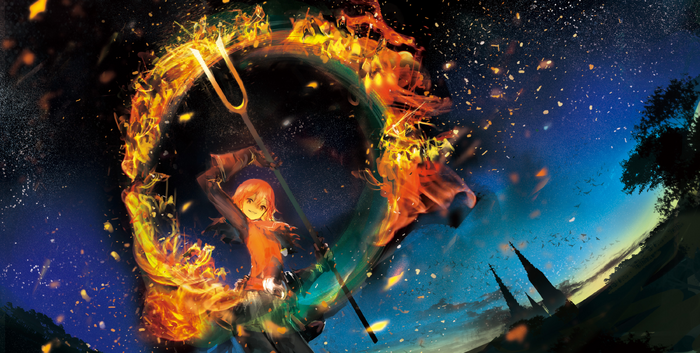 Main Wiki: The Girls Who Shape the World Wiki
The Girls Who Shape the World is an unnamed collection of stories within the same universe written by Nanasa Matari. The books include The Girl Who Ate a Death God, The Maiden Called Hero or Monster, The Girl Who Bore the Flame Ring, and The Girl Who Fell from the Polar Star. In this low fantasy world, wars among men are interrupted by abnormal individuals. Each of the girls in the books has their own story. Schera Zade seeks the destruction of those who wronged her. Noel Bosheit seeks to obtain as much happiness for as many people as possible. The Hero of Arte seeks to destroy all the Demons emerging from the Labyrinth City.

The main protagonists of this verse range from Tier 9-B to 8-A in terms of destructive power. Demons from the Labyrinth City are powerful entities, but none are stronger than the Hero of Arte. The majority of the verse sits at 10-B, with some notable exceptions such as the Lion General Fynn (Finn) reaching 9-C. There is magic but it is extremely rare. In terms of power some of the highest destructive magic used to create the Magic Landmine is only capable of 8-B levels of power. Many of the feats and powers in this verse are physical, with magic being more utility-based such as mind-manipulation auras and immortality.

Cursed Weapons such as Schera's Scythe and Noel's Bident are indestructible magic weapons that have wills of their own and are impossible to wield without superhuman strength, permission from the weapon itself, or possession of a deity such as a Reaper.

Start a Discussion Discussions about The Girls Who Shape the World