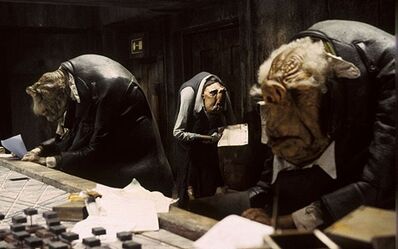 The Government of the Milky Way Galaxy is simply referred to as the Galactic Government. They are known for having a bureaucracy composing entirely of vogons, who hold the real power instead of the "president", despite the president being the official leader.

Tier: At least 5-B with basic technology. At most Low 1-C with their best technology

Origin: The Hitchhiker's Guide To The Galaxy

Age: Unknown. Difficult to measure due to time travel.

Attack Potency: At least Planet level with basic technology (A mere constructor ship was capable of casually destroying the Earth). At most Low Complex Multiverse level with their best technology (One of the most powerful of their ships was capable of reshaping the very concept of time and space, and The Sub-Cyclic Normality Assert-i-Tron was capable of nullifying the reality warping of The Heart of Gold)

Power Source: Multiple methods of producing power from nothing

Industrial Capacity: Insanely high, capable of gaining resources instantly and producing them from nothingness in an instant

Military Prowess: Unknown, as they have never fought an actual war

Note: While The Guide Mark II was produced by the vogons, it was stated to be beyond anything else in the verse, and was only so powerful because of the specific way in which it was made. As such, we cannot assume any other technology is comparable.

Start a Discussion Discussions about The Galactic Government (HHGTTG)