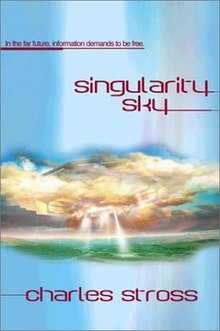 The Festival is an upload civilization originally for purpose of repairing galactic information networks, but now travels between star systems seeking unfamiliar information for the sake of interest and granting wishes to those that they receive it from. It often builds the facilities it needs from local materials when it arrives and usually prefers to interact with other upload civilizations. Due to vast amount of wishes being granted to individuals, allowing civilians to gain deadly weapons and forbidden technology, the New Republic deemed The Festival as a major threat to governmental stability and thus "declared war" against The Festival, only to realize that it is not a force run by living entities or an organization with definite structure and that combating against such a civilization is fruitless.

Territory: Various regions across the galaxy

Technology/Abilities: Non-Corporeal (While the Festival does not exist as a conventional civilization, it represents an "upload civilization" which is essentially a sentient mass of data that controls a large variety of technology, allowing for it to travel on "starwisps" or unmanned lightweight spacecraft), Data Manipulation, Acausality (Type 1), Information Manipulation (Often repairs holes in galactic information flow), Immortality (Types 1, 5, 6, and 9), Creation (Can create virtually any physical structure. Unable to create "abstracts" such as granting individuals powers or fortune), Matter Manipulation (Is able to disassemble and reassemble objects at an atomic scale), Technology Manipulation, Duplication, Elemental Manipulation, Reactive Evolution, Adaptation, Pocket Reality Manipulation (Possesses absolute control over their own pocket realities), Spaceflight, Self-Sustenance (Types 1, 2, and 3), Inorganic Physiology, Quantum Manipulation (Often utilized quantum entanglement to transport data infinitely fast between two locations), Energy Manipulation. Resistance to Causality Manipulation (Can defend against Causality-violating attacks), The Bouncers possess Superhuman Physical Characteristics, Flight, Cyborgization. The Fringes possess Electricity Manipulation, Resistance to Heat Manipulation and Fire Manipulation. The Mimes possess Extrasensory Perception (Can sense invisible and non-corporeal entities) and can transform living creatures into cyborg zombies which can do the same to other creatures that they encounter.

Attack Potency: At least Moon level (Dismantled a gas giant moon and three comets. Deemed as a massive threat to the New Republic despite their non-hostile nature and is able to outmatch humanity's fighting force even while in a non-violent state.)

Power Source: The means with which the Civilization obtains the energy to sustain its technologies

Industrial Capacity: Extremely High. Cornucopia Machines allow them to create virtually any physical structure, including weapons, in a moment's notice.

Military Prowess: The number of soldiers, weapons, warmachines, ships, etc. which the Civilization can employ in conflict

Notable Individuals: The Bouncers, The Fringes, The Critics, The Mimes

Retrieved from "https://vsbattles.fandom.com/wiki/The_Festival?oldid=5175985"
Community content is available under CC-BY-SA unless otherwise noted.