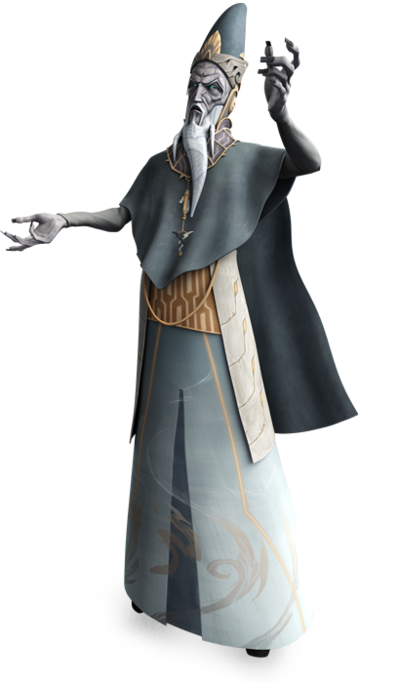 The Father is the patriarch of a family of Force-Wielders known as The Ones. Formerly part of an ancient civilization called the Celestials, the Father maintained the balance between his two children, the Son, and the Daughter, lest the galaxy be ravaged, eventually bringing them outside of the temporal universe into a realm named Mortis. There, he would try and prevent them from escaping, but slowly find his strength waning, forcing him to find the Chosen One and bring balance to his children and the Force.

Classification: Embodiment of the Balance of the Force, One of Mortis

Powers and Abilities: Superhuman Physical Characteristics, Reality Warping, Enhanced Senses, Skilled unarmed combatant, Precognition, Telekinesis, Telepathy, Teleportation, Mind Manipulation, Memory Manipulation, Psychometry, Healing, Resurrection, Barrier Creation (In the form of Force Barrier), Energy Manipulation (Can reflect, redirect, and absorb energy attacks thrown at him), Electricity Manipulation (In the form of Force Lightning), Shapeshifting, Non-Corporeal, Abstract Existence (an embodiment of the Force), Immortality (Type 1, 3 and 8), Regeneration (Presumably Mid-Godly - embodies the Balance of the Force, and the Force itself must be destroyed to truly kill him), likely many, many other abilities (As an embodiment of the Force, the Father can likely use all Force-related abilities in the franchise)

Attack Potency: At least Multi-Solar System level, likely far higher (Created Mortis, a dimension separated from the physical universe containing multiple stars, which collapsed with his death. Far above both of his children combined, and also implied to have defeated Abeloth in the distant past. By maintaining the balance between The Daughter and The Son, The Father maintains the equilibrium between the entire Light and Dark Sides of the Force. Superior to Anakin Skywalker empowered by the entire Force in Mortis. Considered by Word of God to be the strongest Force user in all of Star Wars)

Speed: Massively FTL+ (Equal if not superior to Abeloth and his children)

Durability: At least Multi-Solar System level, likely far higher (Capable of deflecting attacks from Abeloth. Even when significantly weakened, the Father was capable of surviving prolonged exposure to the Son's Force Lightning), the abstract nature of his existence makes him difficult to kill

Range: Melee range with physical strikes, Galactic with Force powers (Much stronger than Darth Sidious who previously showcased this type of range)

Intelligence: Skilled and experienced combatant, holds a million years worth of knowledge in the Force and can wield it in ways no Jedi or Sith can

Weaknesses: The Dagger of Mortis is capable of killing him