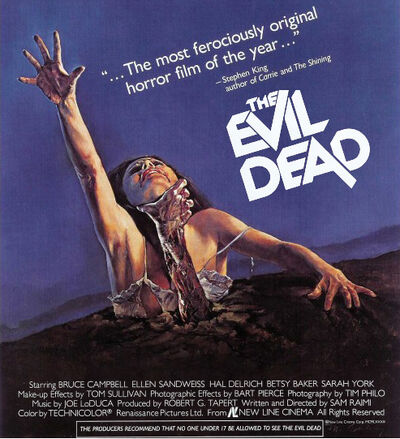 For detailed information about this series, visit the Evil Dead Wiki.

The Evil Dead is a series of four horror films created by Sam Raimi. The films focus on the protagonist, Ashley "Ash" J. Williams, who is played by Bruce Campbell. Ash deals with "deadites", which are undead antagonists created by the Necronomicon Ex-Mortis.

The film series has since expanded into other formats such as video games and comic books. An off-Broadway musical opened in Toronto in 2003 based on the storyline of the first two films.

The TV Series Ash vs. Evil Dead ran from 2015 until 2018 and altogether had three full seasons.

Ashley "Ash" Williams (Bruce Campbell), his girlfriend and three pals hike into the woods to a cabin for a fun night away. There they find an old book, the Necronomicon, whose text reawakens the dead when it's read aloud. The friends inadvertently release a flood of evil and must fight for their lives or become one of the evil dead. Ash watches his friends become possessed, and must make a difficult decision before daybreak to save his own life in this, the first of Sam Raimi's trilogy.

The second of three films in the Evil Dead series is part horror, part comedy, with Ash Williams (Bruce Campbell) once again battling horrifying demons at a secluded cabin in the woods. After discovering an audiotape left by a college professor that contains voices reading from the Book of the Dead, Ash's girlfriend Linda (Denise Bixler) becomes possessed by evil spirits that are awakened by the voices on the tape. Ash soon discovers there is no escaping the woods.

Ash is transported back to medieval days, where he is captured by the dreaded Lord Arthur. Aided by the deadly chainsaw that has become his only friend, Ash is sent on a perilous mission to recover the Book of the Dead, a powerful tome that gives its owner the power to summon an army of ghouls.

Ash is baaaack! Bruce Campbell reprises his "Evil Dead" film role as heroic, chainsaw-handed monster fighter Ash Williams, now an aging lothario who has successfully avoided responsibility, maturity and heinous villains for the past 30 years. Constantly peering over his shoulder, Ash somehow knew that the Evil Dead would return for him. That day arrives when Ash commits an act of carelessness, unleashing a Deadite plague that threatens to destroy mankind. Co-starring in the half-hour series are Lucy Lawless as mysterious Ruby; Ray Santiago as Ash's loyal sidekick, Pablo Simon Bolivar; and Dana DeLorenzo as moody wild child Kelly Maxwell.

Mia (Jane Levy), a drug addict, is determined to kick the habit. To that end, she asks her brother, David (Shiloh Fernandez), his girlfriend, Natalie (Elizabeth Blackmore) and their friends Olivia (Jessica Lucas) and Eric (Lou Taylor Pucci) to accompany her to their family's remote forest cabin to help her through withdrawal. Eric finds a mysterious Book of the Dead at the cabin and reads aloud from it, awakening an ancient demon. All hell breaks loose when the malevolent entity possesses Mia.

Evil Dead franchise has zombies, magicians, a book that can summon demons and send people back in time, and hax such as possession, resurrection etc. The attack potency is lacking but it has many types of hax abilities which makes a decently strong verse.

Start a Discussion Discussions about The Evil Dead