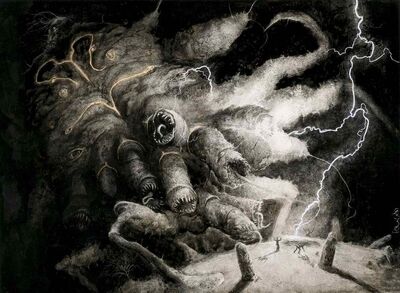 The Dunwich Horror is the title given to an entity from the short story of the same name, which is part of H.P. Lovecraft's Cthulhu Mythos. The Dunwich Horror is a partially human monstrosity created when Noah Whately supposedly invoked the entity Yog-Sothoth to impregnate his daughter with a being which would bring about the end of humanity and open up the gate for the Great Old Ones to once again roam the world. Unlike its brother, Wilbur Whately, the other twin was unable to pass for human. Not only did it supposedly "resemble its father" far more than Wilbur did, but it was also invisible to the naked eye. For years, it was kept in the Whately's barn, being fed animals as it continued to grow and change. Finally, the entity grew to a large enough size to burst from the barnhouse and go on a rampage through the countryside. The monster was eventually stopped by Professor Henry Armitage, who managed to destroy it via a spell from the ancient Necronomicon. The hideous creature's first and last words were a cry to help from its father before it was obliterated by a bolt of magical lightning and sent to the realms of its father.

Name: The Dunwich Horror, The Other Twin, ??? Whately (it is unknown if the being was even given a name)

Classification: Inhuman child of Lavinia Whately and Yog-Sothoth, Sibling of Wilbur Whately, Freer of the Great Old Ones

Powers and Abilities: Superhuman Physical Characteristics, Invisibility, Great Old One Physiology, Absorption, Blood Draining, Immortality (Types 1, 3, and 9. Even when killed, its essence still exists in Outer Realms and Higher Dimensions), Madness Manipulation (Type 3. Simply looking at it can make people go insane, and even while it was invisible, people started to become unhinged just from being around it), Mind Manipulation (Its cries were said to be heard and effect people on a psychological and physical level), Regeneration (Unknown, possibly Low Godly scaling from other beings with a similar physiology), Invulnerability, Summoning (Able to open up gates to the Outer Realms of its father to summon Great Old Ones), Portal Creation, Possibly BFR (It was stated that the Great Old Ones may move the earth to a distant realm), Dimensional Manipulation, Shapeshifting, Large Size (Type 1), Resistance to conventional harm, Void Manipulation (It should not be able to exist in the first place, but remains to exist regardless), and Reality Warping.

Attack Potency: Unknown, at least Large Building level (The creature, when visible, was described as at least the size of a moderately large building), likely far higher (In normal situations, it shouldn't have even been capable of existing on an earthly plane, and is supposed to exist in the Outer Realms beyond the gates). Varies via summoning (Capable of Summoning Great Old Ones and Elder Gods).

Speed: At least Superhuman (Able to rampage across the countryside in a very short period of time)

Durability: Unknown (As the child of an Outer God with a physiology similar to that of the Great Old Ones, the being is almost completely impervious to conventional harm and reality warping, and very hard to properly effect in general, but is vulnerable to specific types of magic)

Weaknesses: While the monster is completely immune to almost all forms of lasting harm, certain types of magic can destroy it permanently.

Note: Before creating a VS thread, the creator must choose the location very carefully, as the Dunwich Horror fights very differently depending on what environment he is in. He usually only goes for his summoning in areas with mountains, hills, or areas that are notably supernatural. When he is in other areas, he tends to move towards areas with mountains and hills, while carving a path of destruction and favoring his absorption and mental attacks.

Start a Discussion Discussions about The Dunwich Horror