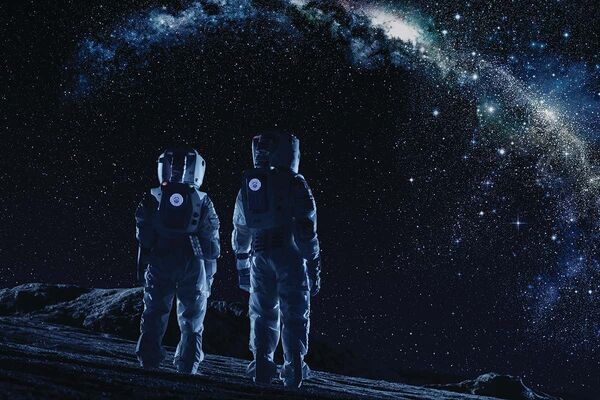 The Downstreamers, also known as The Old Ones after the collapse of their multiverse, are a hyper-posthuman civilization. Born in the "primal universe," they are the first and oldest race in Manifold, and are in fact the creators of said Manifolds and the descendants of humanity in a sense. They survived the heat death of their universe, seeking to expand their possibilities in regard to the creation of life, and so reached back in time to send messages to the 21st century, telling their ancestors, the "maligned Blues," of their plans to restructure the Manifoldverse.

Name: The Downstreamers, The Old Ones, The Ancestors from The Afterglow

Gender: Varies, possibly Unknown (Individual Downstreamers are formerly human and retain their mental humanity upon ascension, but as beings of pure information, it is unknown if they still retain "gender" or not)

Territory: The entirety of existence

All previous Powers and Abilities on a far higher scale, Higher-Dimensional Manipulation, Time Manipulation (Time Acceleration; can significantly accelerate flow of time in a solar system), Transduality (Type 3 ; Manifoldverse encompasses all forms of mathematical/logic systems), Immortality (Type 5 and 10, they exist beyond decay and death), Large Size (Type 11), Beyond-Dimensional Existence (Type 2), Conceptual Manipulation (Type 1 ; the Old Ones Created and transcended an "ultimate reality" which contains the crux of all logical concepts), Law Manipulation, Soul Manipulation, Information Manipulation, Data Manipulation, Possibly Reactive Power Level (They transformed into a much stronger form when killed. However, it is not clear if they can continue to get stronger this way)

Attack Potency: Low Multiverse level (Can effortlessly create abstract material with their thoughts which can withstand the combined energy of a thousand big bangs per second. Similarly, they possess weapons capable of carving giant maws on a construct which is noted to be trillions of times bigger than our current observable universe. Capable of altering the fabric of time in thousands of universes, including at least one 11-dimensional M-Theory universe) | Outerverse level (The Old Ones' capability, which includes the effortless manipulation of the fabric of existence, is nearly boundless, and they are capable of creating infinitely-layered multiverses that contain an equally infinite number of multiverses within them. The Manifoldverse itself consists of an infinite hierarchy of infinite multiverses. In Manifoldverse, there exist at least one realm which is beyond the structure of spacetime, where mathematical concepts such as; "add" and "substract" lose all meaning, and in which the notion of dimensionality is meaningless. Manifoldverse consists of an infinite number of infinite multiverses, encompassing all forms of mathematics and formalisms; Type IV Tegmark Multiverse, The Old Ones themselves exist at the top of this endless hierarchy, far beyond the applications of normal space and time, and maybe one with an "Ultimate Manifold", that encompasses all other manifolds in the tapestry of existence. Superior to all physical laws as they can be described, they have a near complete understanding of existence itself, allowing them to modify a few rules governing how the entirety of the verse works, such as likely changing the type of the multiverse, which enables them to create "infinite possibilities for life and mind")

Power Source: The entirety of existence

Speed: Massively FTL+ (Their non-corporeal forms include a Causal Loop computer that essentially make them know things before they happen, and they also possess FTL ships with which to transport lesser races) | Irrelevant (Created the Red Moon, a construct that could travel through an infinite amount of possible universes within a finite scope of time through the use of phase-space engineering. Capable of easily changing the constants of reality to be able to travel in ways that cannot be described by human language, and may transcend the concept of movement itself)

Durability: Low Multiverse level (Some Downstreamers, who don’t come from the "Time of Afterglow," are born from naked singularities. They are capable of surviving even when exposed to such a naked singularity at close proximity. They can produce material strictly from their thoughts that can withstand the combined force of a thousand big bangs per second; said material is completely immune to any change in the laws of physics. The Downstreamers as a whole were also fully capable of surviving the heat-death of a universe, though it is unknown to what degree they were weakened as a result of this). Likely High Hyperverse level (Individual Pre-FVC Downstreamers are intangible neutrino/quantum consciousness/informational beings, which could survive the collapse of an infinitely-layered reality) | Outerverse level (Reached a new level of existence, which was vastly superior to its previous incarnation, transcending the whole of known reality and the "infinite ensemble," of possible multiverses that arranged due to the Manifold's expansion)

Range: Interstellar (Pre-FVC Downstreamers are described to be a "light-year wide," in size) to Low Multiversal (Capable of enacting time-line alteration on at least 1000 non-causally connected universes, and could set up Time Portals made of physics-warping material at will in at least 1000 universes) to Low Outerversal (They have access to the whole Manifoldverse) | Outerversal (Capable of controlling and initiating cosmic inflation across the multiverse, in which universes are described as "mere bubbles of foam on an ocean". The Old Ones exist in the “ultimate manifold”, on top of an endless hierarchy that encompasses all other manifolds in the tapestry of existence)

Intelligence: Nigh-Omniscient (Know how every possible event in the universe will unfold down to the quantum level. Their "brains," are Causal Loop computers, a device which grants them infinite thinking and processing power.) | Nigh-Omniscient (The Old Ones exist at the top of endless hierarchies of infinity, and are able to comprehend the "ultimate manifold" that encompasses all other manifolds in the tapestry of existence.)

Weaknesses: Dependent on energy (Mainly from Black Holes). If they are present in a universe approaching heat death, their abilities take significantly longer to use, as they cannot collapse any black holes to sustain their abilities and technology. | None notable

Start a Discussion Discussions about The Downstreamers