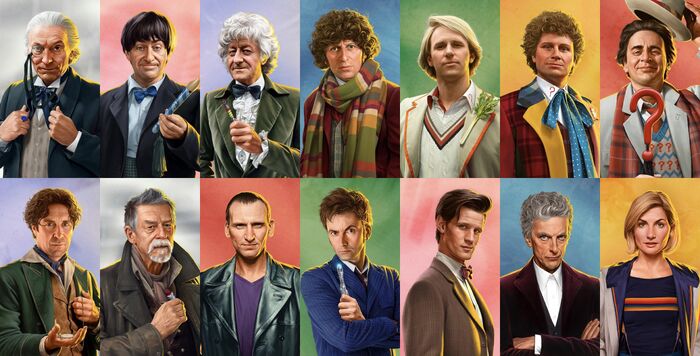 The Doctor is the titular main protagonist of the British television series Doctor Who. A renegade Time Lord from the planet Gallifrey, the Doctor has gone on various adventures throughout time and space with his companions, saving countless lives and preventing the destruction of the universe and beyond multiple times.

Name: Unknown, goes by "The Doctor", also known as Doctor Who, Theta Sigma (ΘΣ), John Smith, ∂³∑x² (one source stated that "∂³∑x²" is their real name, but it is vague and never been confirmed in any Doctor Who narrative), "The Oncoming Storm", "The Last Child of Gallifrey", "Timelord Victorious", "Valeyard", and many others

Age: Unknown biologically (The Doctor often forgets, and sometimes, lies about his age), over four billion years old mentally due to the events of "Heaven Sent"

Superhuman Physical Characteristics, Regeneration (High-Low), Longevity (Each regeneration cycle could last for about 1000 years), Telepathy, Preparation, Martial Arts (The Doctor can use Venusian Aikido), Paralysis Inducement (Used Venusian aikido to stun Epzo with only one finger), Mind Manipulation (The Doctor occasionally practice hypnosis, and use it multiple times), Memory Manipulation, Acausality (Types 1 and 4, Can exist outside of localized time loops and is merely weakened when his past selves are taken or erased outside of time-line. Time Lords are stated to exist outside "the normal chain of causal events"), Extrasensory Perception, Status Effect Inducement, Magic, Sleep Manipulation (Can put people to sleep with a single touch), Limited Life Manipulation (Charged a power cell of his TARDIS with his breath, although he admitted that it took ten years off of his life), Social Influencing (Can bring down Harriet Jones' government with six words, started a rumour that he thought she looked tired, and therefore wasn't up to the job of running the country, which spread throughout other MPs and the media, and she was eventually ousted. Can turn an army around at the mention of his name), Causality Manipulation and Probability Manipulation (It was stated that causality loops around him and that the "odds collapse" in his presence), Supernatural Luck (When a Time Lord’s life is threatened, or they finds themselves in a situation where escape seems impossible, curious episodes transpire as if by chance, weather conditions inexplicably change, distracting the enemy long enough for the Time Lord to slip away. Mysterious third parties just happen to pass by, inadvertently saving the Time Lord from their fate. Even when they are put in a place of confinement, doors which are thought to be secure are found to have been left unlocked, and competent guards look the other way at precisely the wrong moments), Enhanced Senses (Can decipher the composition of objects by taste), Precognition (Time Lords can naturally see if events in time are fixed or can be manipulated), Fourth Wall Awareness

Resistance/Immunity to many forms of Radiation, Plot Manipulation (Capable of somewhat acting against the will of the master of the land of fiction in his own realm), Poison, Precognition (His future and past cannot be easily detected by beings that can see this sort of thing), Telepathy attacks, as well as Possession and is highly resistant to Mind Manipulation (The Doctor can resist forms of hypnosis, such as BOSS's conditioning at its strongest power frequency. Able to close and seal his mind from the Eternals), as well as the vacuum of space. Is also resistant to time alterations such as remembering people/objects that are erased from time and time loops and surviving extremely hot/cold temperatures for short periods, Is also capable of surviving without oxygen for a short period

For the other gadgets, see list below for more information

All previous, plus Existence Erasure with De-mat gun, Clairvoyance, Life Manipulation, Sound Manipulation, Disease Manipulation, Explosion Manipulation, Reality Warping and Law Manipulation with the Amaranth (The Amaranth could look for parts of reality that become warped, frayed, or ambiguous, and rebuild them according to more "rational patterns"), Pocket Reality Manipulation (His pockets are bigger on the inside. Implied to have made a pipe system larger on the inside during his time on Trenzalore, a planet largely devoid of technology), Biological Manipulation (Can change species by rewriting every cell in his body), Durability Negation (Can bypass dimensional barriers), Space - Time Manipulation and Power Nullification (Created a Crystal that can turn Eternals into ordinary humans), Portal Creation, Nanotechnology, Summoning (Can summon living metal that can reform itself upon death, as well as Chronovores), Homing Attack, BFR, Sealing (Trapped Sister of Mine in every mirror in existence. Sealed Fenric inside a magic “genie” bottle. His modified De-mat gun can also be used to sealing the Medusa Cascade), Time Stop (Time stopped Son of Mine before putting him to work as a scarecrow forever), Enhanced Senses (Can see normally invisible beings with his mirror), Soul Manipulation (Trapped Kizlet’s soul inside a computer as karma for her having done so to Clara), Size Manipulation with Tissue Compression Eliminator, Attack Reflection and Law Manipulation (Obtained an amulet with the symbol of the Gods of Ragnarok that allowed him to reflect their own power against them, and then severed their connection to existence, making them no longer omnipresent like the Guardians), Resistance to Existence Erasure with the Chronon Blocker (Chronon Blocker allow user to block and resist existence erasure, but the effect will disappear if the user travels to different point in time), Mind Manipulation and Perception Manipulation with De-mesmeriser (Can nullify the effects of Mind Control and Perception Manipulation)

Attack Potency: Small Building level (Fought The Master, who can harm him, on various occasions, even outmatching the latter in combat. Punched down a steel door, continuously struck a twenty-foot thick Azbantium wall, a mineral 400 times harder than diamond, to the point where it eventually shattered, even after breaking his hand in the attempt), at least City level with Sonic Screwdriver (The War Doctor, Tenth Doctor and Eleventh Doctor's three sonic screwdrivers destroyed a Dalek) and Time War Gun (Destroyed a Skaro Degredation, which have reinforced armor capable of withstanding their own attacks. Threatened to atomize Alice Obiefune). Solar System level, likely far higher during regenerations (The Eleventh Doctor's regeneration destroyed a Dalek Saucer) | High Complex Multiverse level with Preparation (Acquired The Moment, the Time Lord's most powerful creation, and would have obliterated Gallifrey and the Daleks. The Key to Time grants its wielder the full power of The Six-Fold God), can bypass durability with various equipment (The 2Dis is capable of expanding or contracting the spatial dimensions of an object, rendering it 2nd or 3rd dimensional, the De-Mat Gun rewrites a target's history, erasing their physical form from existence) | High Complex Multiverse level (Absorbed the power of Lux Aeterna and fought with the Quantum Archangel, causing her serious harm in the process, although he was eventually overpowered) | High Hyperverse level (Gained the power of the Glory. Fought against The Master who's comparable to him)

Durability: Small Building level (Easily withstood direct contact with a Sycorax whip, which can disintegrate humans. Survived a fall from several hundred feet through a glass ceiling, was only briefly knocked out by a gun that could be fatal to humans), Higher after Regeneration (Comparable to River Song, who tanked large amounts of gunfire) | At least High Complex Multiverse level with the Mirror Amulet (Reflected the Gods of Ragnarok's power back at them, destroying their Psychic Circus and severing their link to the universe) | High Complex Multiverse level (Survived attacks from the Quantum Archangel, though he was on the verge of being killed after an extended fight) | High Hyperverse level (Survived attacks from the master, although he was eventually overpowered)

Stamina: Very High (Even on the verge of death, a Time Lords' bodies will keep trying to regenerate, sometimes taking days to succumb to their injuries. Was able to crawl up a staircase for 1.5 days in critical condition and with highly minimal rest after punching a wall 400 times harder than diamond, which shattered his bones. Withstood 500,000 rads from a nuclear bolt after being heavily damaged) | Likely Limitless | Likely Limitless

Intelligence: Supergenius. Knows incredible amounts of things about the universe (Claims to be able to speak every language in the universe, and is capable of easily deducing equipment to its point of origin). Can know the details of objects just by tasting/smelling them, and can tell where he is in the universe by looking at the alignment of stars. He has created various equipment/weapons out of nothing but junk on several occasions. Has a very in-depth knowledge on Earth history (Because of traveling their lots) and has picked up many skills from various historic people in his travels. On several occasions various incarnations has fought, defeated, and outsmarted beings such as the Eternals and Guardians of Time.

Standard Tactics: Generally avoids using the sonic screwdriver or guns in combat unless absolutely necessary. Usually relies on non-lethal incapacitation methods, such as taking away his opponents powers, trapping them inside mirrors, trapping them in a time loop, etc

Weaknesses: Is unwilling to change fixed points in history (Although sometimes he has ignored this). Generally hates using guns. Burning out both his hearts will stop him from regenerating, as well as killing him before he can finish regenerating (He also has a finite, albeit unknown and likely very large, limit to his number of regenerations). The Sonic Screwdriver doesn’t work on wood or anything with a deadlock seal | The Glory refuses to give its wielder "immortality"

CLARA: One question. And you will answer. How long was the Doctor trapped inside the confession dial?

OHILA: We think four and a half billion years. Hell Bent

In the episode "Oxygen", the Doctor gave his helmet to Bill and was able to survive several minutes in the vacuum of space without a space helmet, although this makes him blind. source

Key: Normally | With Preparation Time and Equipments | After Absorbing Lux Aeterna | With the power of the Glory

His ninth incarnation that fought in the Time War.

Her fourteenth incarnation.
Add a photo to this gallery

Retrieved from "https://vsbattles.fandom.com/wiki/The_Doctor_(Doctor_Who)?oldid=6874788"
Community content is available under CC-BY-SA unless otherwise noted.