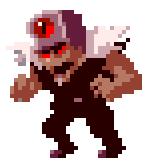 The Doctor is the main antagonist of Cave Story, in which he attempts to enrage army of Mimiga with red flowers. His plan to take over the surface world is ultimately stopped by Quote. He is the fourth wielder of the powerful Demon Crown, and creator of the Red Crystal.

Powers and Abilities: Magic, Levitation, Energy Projection, Teleportation, Mind Manipulation (Can control Misery and Balrog, and planned to control an army with the Demon Crown) | All of the previous to a greater extent, plus Danmaku, Summoning, Possession, Non-Corporeal, Intangibility, Immortality (Type 8, uses the Red Crystal to keep himself alive), Invincibility (Conditional Invulnerability, when he is charging his attack he is unable to be damaged), Madness Manipulation (Type 1)

Attack Potency: Unknown | Small City level+ (Contended with Quote, who had defeated The Core, which was the only energy at the time keeping the island afloat)

Speed: Massively Hypersonic (Can keep up with and fight Quote)

Stamina: Unknown (Likely to a human amount, but he never really exerts himself much), Very High in Muscle Doctor form, likely limitless in Undead Form (Will be alive as long as he has The Red Crystal)

Intelligence: Genius (Was once a medical doctor and has learned a lot of magic)

Feats: Took control over Misery, Sue and the Core

Key: With Demon Crown | With the Red Crystal

Retrieved from "https://vsbattles.fandom.com/wiki/The_Doctor_(Cave_Story)?oldid=5175954"
Community content is available under CC-BY-SA unless otherwise noted.