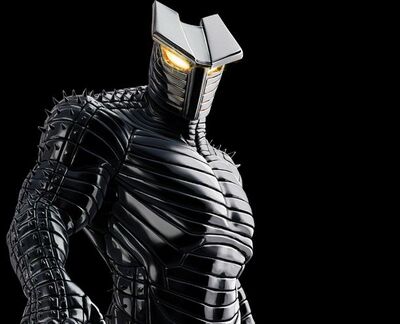 The Destroyer was an enchanted automaton controlled by Odin to guard his vault on Asgard.  When the throne of Asgard was upsurped by Loki, the Destroyer was sent to Earth to kill the exiled and depowered Thor. The Destroyer found Thor in New Mexico and seemingly killed him, despite the efforts of Sif and the Warriors Three.  However, Thor's selfless efforts evacuating the area of innocents made him worthy of his powers again, which allowed him to fight the Destroyer and render it inoperable.  The disabled Destroyer was confiscated by S.H.I.E.L.D. and was reverse-engineered to create a powerful laser weapon.

Attack Potency: Large Town level (Far stronger than the combined might of Sif and the Warriors Three, a weaker weapon reverse-engineered from its remains was able to harm Loki, and its power should be at least equal to its durability)

Durability: Large Town level (Withstood a few attacks from Thor, and had to have its own power turned against it to be defeated)

Weaknesses: Can be controlled by the wielder of Gungnir.

Retrieved from "https://vsbattles.fandom.com/wiki/The_Destroyer_(Marvel_Cinematic_Universe)?oldid=5934984"
Community content is available under CC-BY-SA unless otherwise noted.