The Dazzlings are the villains of the My Little Pony: Friendship is Magic movie Rainbow Rocks. Initially a group of Sirens from Equestria, they were banished to the human world more than a thousand years ago by Star Swirl the Bearded and have been stuck there ever since. While trapped in human form, the Dazzlings still possess some of their magical power, such as the ability to control the minds of others with their voices and the capability to feed on negative emotion.

Age: Thousands of years old (Were around before Starswirl first sealed away the Pony of Shadows)

Powers and Abilities: Can absorb the negative energy of those around them to increase their power, Mind Manipulation | Superhuman Physical Characteristics, Flight, can create visible sound waves to affect others and damage them, can summon their true Siren forms | Superhuman Physical Characteristics, Energy Projection, Flight, can create visible sound waves, Mind Manipulation

Attack Potency: Wall level+ (Comparable to Sunset Shimmer) | Universe level+ (Stronger than their Primes. Able to fight off and overpower the combined might of the Equestria Girls prior Pony-Up Forms, which the forms used by the Rainbow Rocks Equestria Girls were able to create and empower Daydream Shimmer, who can effortlessly stave off the destruction of two realities with her powers) | Solar System level, possibly at most Universe level+ (Stronger than Starswirl the Bearded. Were considered a serious threat to Equestria).

Durability: Wall level | Universe level (Stronger than their Prime) | Solar System level, possibly at most Universe level+ (Above Starswirl the Bearded, had to be banished to another universe in order to be defeated).

Range: Several meters with sound waves and energy absorption | Likely Tens of kilometers (superior to Rarity) | A few hundred kilometers at least, was stated their magic would be able to spread across and divide and shatter all of Equestria.

Standard Equipment: Their red jewels that give them power.

Weaknesses: They become powerless if the jewels around their necks are broken. 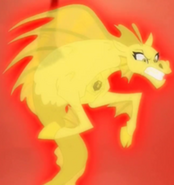 Start a Discussion Discussions about The Dazzlings