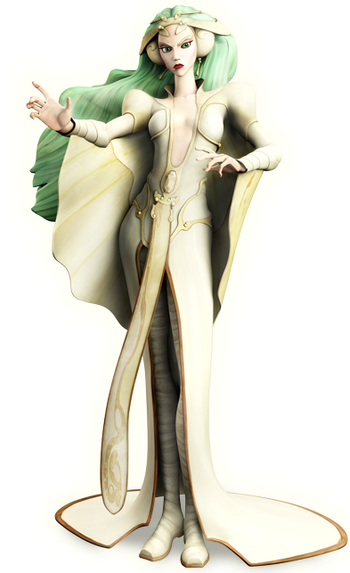 The Daughter, known in Dathomiri religion as The Winged Goddess, is a member of a family of Force-wielders from the planet of Mortis. She served as the pure embodiment of the Light Side of the Force, representing emotions such as love, peace, and harmony. This was in contrast to her brother, the Son, who embodied the Dark Side. Due to their naturally opposing natures, the siblings warred with each other for untold millennia, forcing their Father to take them to the planet of Mortis, outside of the temporal universe, to prevent them from ruining the galaxy. While the Daughter accepted her role and imprisonment, the Son constantly attempted to kill both of them and escape Mortis to wreak havoc on the galaxy, something his sister would always attempt to prevent.

Classification: Embodiment of the Light Side of the Force, One of Mortis

Powers and Abilities: Superhuman Physical Characteristics, Reality Warping, Enhanced Senses, Skilled unarmed combatant, Precognition, Telekinesis, Telepathy, Mind Manipulation, Memory Manipulation, Psychometry, Healing, Barrier Creation (In the form of Force Barrier), Energy Manipulation (Can reflect, redirect, and absorb energy attacks thrown at her), Shapeshifting, Regeneration (Presumably Mid-Godly - embodies the Light Side, and it must be destroyed to truly kill her), likely many, many other abilities (As an embodiment of the Light Side, the Daughter can likely use all Light Side related abilities in the franchise), Abstract Existence, Immortality (Types 1, 3 and 8), Non-Corporeal

Attack Potency: At least Multi-Solar System level, likely higher (As a Force-Wielder, The Daughter is far superior to any Jedi or Sith in terms of Force Manipulation, which should put her far above Aleema Keto commanding the power of Naga Sadow's Corsair, Jerec when tapping into the Valley of the Jedi, and Master Yoda. Should be immensely above a mere Force-entity such as Wutzek, who has enough power to destroy a solar system. Created The Maw, a cluster of black holes surrounded by a nebula, alongside her brother. Should easily be superior to the World Razer. If she and The Son ever fought in the galaxy, their battle would destroy it. The Daughter's fighting with The Son in Mortis turned the planet into the fulcrum of the entire galaxy and the entire Force of the universe)

Speed: Massively FTL+ (Should be in the same league as Abeloth, capable of traveling across the galaxy/universe on her own)

Durability: At least Multi-Solar System level, likely higher (Capable of trading blows with The Son and has fought him countless times in the past, survived a beating from Abeloth. Endured attacks from Anakin Skywalker when he was amped by the Force that flows through Mortis, which is the fulcrum of the galaxy and the entire Force of the universe), the abstract nature of her existence makes her very hard to kill

Range: Melee range with physical strikes, Galactic with Force powers (Much stronger than Darth Sidious who previously showcased this type of range)

Intelligence: Inhumanly High. Bathed in the Pool of Knowledge, allowing her to see all that has happened and will happen, and was described as holding "absolute, infinite knowledge". Can wield the Force in no way mortals in the galaxy can.

Weaknesses: Her power is tied to the Father, meaning that if the Father dies, she is significantly weakened, the Dagger of Mortis is capable of killing her

Start a Discussion Discussions about The Daughter