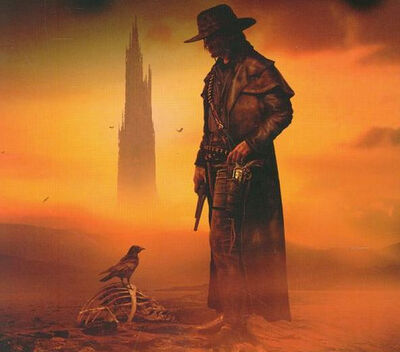 For detailed information about this series, visit The Dark Tower Wiki.

The Dark Tower is a dark fantasy series written by Stephen King consisting of 7 books (and a spinoff). The series connects all of his works together. A comic series exists based on the work, as does a recent film that stands as a sequel to the books. A television series tying into the new film is also currently in production.

The Dark Tower is an incredibly powerful verse. Each floor of the tower is infinitely greater than the previous. It has every Stephen King character ever written, including several cosmic entities. There exists a race of humans with technology capable of altering the fabric of existence, as well as beings who transcend the infinite-dimensional multiverse in its entirety.

To top it all off, there exists an ultimate Tier 1-A supreme being: Gan, whose spirit embodies The Dark Tower, and is the author of everything, utterly transcendent of every other being in the verse.

Start a Discussion Discussions about The Dark Tower