VS Battles Wiki
Register
Don't have an account?
Sign In
Advertisement
in: Characters, Umineko no Naku Koro ni, When They Cry,
and 131 more 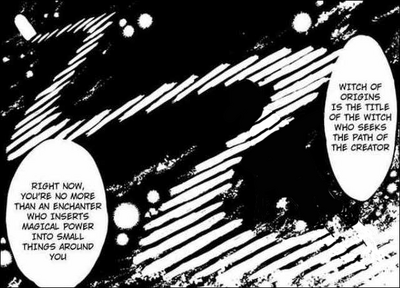 The Creator is the supreme being that stands beyond all restrictions, including that of one's 'meaning' and 'will', as the endless sea of zero. It's the ultimate state of being a Witch reaches as it evolves through the infinite layers of the Witch and 3rd Domain, losing restrictions with every step, and gaining freedom as it ascends towards godhood.

The Creator is a sacred being who can create 1 out of the sea of nothingness. It can give birth to 1 from 0, give birth to the endless, and then return it to 0 again in a flash. Freed from all restrictions, the voyagers in particular even call him God.

In that sense, perhaps the Witch of Origins, Maria, is the "chosen one" promised to be The Creator...

Voyagers fear that the end of their own journey is to become a Creator. As to why they would be frightened of evolving into a higher-order being, none can understand except they themselves.

Attack Potency: Boundless (The Creator is completely boundless and devoid of any existential limits and restrictions whatsoever, being the root cause out of which everything else in the setting originates and being completely transcendent over all meaning and definition, even in relation to entities such as Featherine Augustus Aurora) 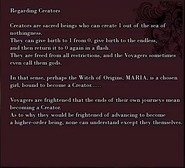 Notes: Featherine isn't "a" Creator. The English translation says something like "Featherine transcended the level of witches and became a Creator". However, the Japanese version stated that Featherine transcended the realm of witches and reached the realm of the Creator, but she only touched the last boundary. Anyone who actually becomes part of the Creator itself is completely erased, due to loss of all restrictions, including life, death, and meaning. This also explains why "Creators" does not make sense. The Japanese version has no plural.