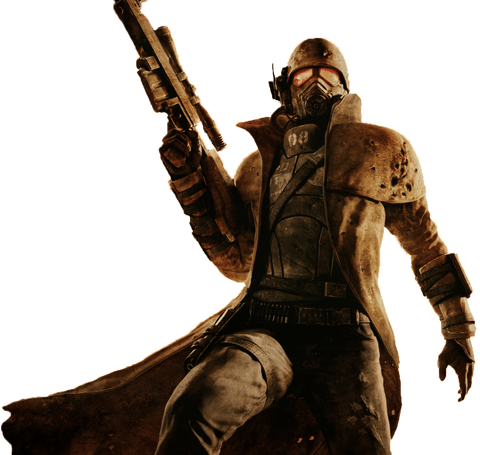 The Courier is the character you play in the game Fallout: New Vegas. Fallout: New Vegas is a game based around Las Vegas after a global nuclear war which wiped out most of humanity. Now, there is a war between two factions called the NCR and the Legion. Some people survived by hiding in vaults made by company called Vault-Tech. Many of the people and animals on the outside were mutated into strange beings which are found all over the world, and there are also many robots and mechanical beings.

The Courier was delivering a package to a mysterious person called Mr. House; however, before The Courier got to deliver the package he was stopped by man named Benny and a few people from a clan called Great Khans, and got shot in the head and left for dead. Now, The Courier seeks answers regarding his assailant's whereabouts...

Gender: Chosen by the player at the start of the game

Age: Chosen by the player

Classification: Human, Courier, can become a Cyborg during the events of Old World Blues

Powers and Abilities: Superhuman Physical Characteristics, Social Influencing (Can convince even the likes of Legate Lanius to retreat),Extreme Luck (Can make casinos go bankrupt just by sheer luck while playing blackjack. survived getting shot in the head), Lockpicking, Science, Natural Stealth (can sneak around relatively close to Deathclaws without being spotted who are known for their great senses, stealth boys amplify this to tremendous means. walks naturally without any sounds and doesn't set off any traps), Medicine, Explosives and Survival expert, Weapon Mastery (Proficient in melee weapons as well as firearms), Expert Hand-to-Hand Fighter, Genius Intelligence, Limited Time Manipulation (With V.A.T.S.), Regeneration (Low normally, Mid-Low when exposed to sunlight or when afflicted with radiation sickness), Limited Teleportation (Can teleport to big mountain via the Transportalponder Device), Summoning (Can randomly ending up summoning The Mysterious Stranger or Miss Fortune), Invisibility (with the Stealth Boy device), Hacking, Adaptation (can adapt to most environments), Cyborgization (can become cyborg if the player wish so), Natural Night-Vision, immunity to poisons. Paralysis Inducement (Can paralyze a target for 30 seconds with an unarmed VATS attack. Compliance Regulator can paralyze enemies by 10 seconds.) Energy Manipulation and Energy Projection, (Uses a plethora of laser weapons and Alien weapons) Plasma Manipulation (Uses Plasma Weapons) Immense Pain Tolerance (Can walk around with multiple broken bones with no signs of pain whatsoever and perform most actions unhindered) Limited Radiation Manipulation (Some of his weapons emit radiation) Statistics Amplification (Sneak attacks and critical attacks do much more damage than normal. Some of his items can increase his strength, speed, perception, and durability) Healing (His healing can restore much of his health and repair broken bones) Fear Manipulation (With the terrifying presence perk he can easily intimidate and terrify many enemies in the wasteland easily making them flee, can make heavily armed Brotherhood Of Steel members whimper in fear just by talking to them) Underwater Breathing (Has a rebreather and can use it perfectly) Explosion Manipulation (Has multiple explosions) Poison Manipulation (Can apply deadly poisons to his weapons.) Light Manipulation (Has flashbangs, his pipboy can act as a flashlight) Fire Manipulation and Heat Manipulation (Can use incendiary bullets and weaponry Electricity Manipulation (Has multiple electrical weapons) Information Analysis (Can analyze enemies including their defense and resistances) Animal Manipulation (Can pacify all types of animals and can even call them to his aid)Heat Manipulation via Laser Detonator Minor Purification (Can purify irradiated water by drinking it) Minor Preparation (Can prepare mine traps, C4 detonation, Plsma mines, etc) Rage Power (With Nerd Rage! perk, applies damage resistances activated. activated when Courier is closed to death) Durability Negation (His shotguns can ignore a bit of an opponents armor and durability and with Piercing perk, he can negate some of the durability with his melee weapons or unarmed.) Limited Absorption (Absorps radiation overtimes with Rad Absorption perk) Cannot be knocked down by melee. Sound Manipulation (With Sonic Emitter), Can call down orbital laser strike with Euclid's C-Finder. Empowerment (When exposed to sunlight and radiation.) Accelerated Development (Quickly mastered various weapons and skills in short amount of time. Learned how to use power armor just by watching tapes) Matter Manipulation (Some of his weapons cause molecular destabilization) Does more damages against robots,animals,insects,abomination,mutants (With Machine Head/Purifier/Mutant Massacrer/Abominable/Animal Control/Bug Stomper/Entomologist.)

Attack Potency: Wall level (Far tougher than a normal human, can fight large monsters in hand-to-hand combat), weapons range from Street level to Building level (Many of his weapons are capable of this level of destruction. energy weapons such as the Laser Rifle is capable of turning large bears to ash and the Fat Man fires small scale nuclear missiles) (Destroyed giant robo-scorpion that can tank mini-nukes. Fought Tunnelers, a creature that can rip Deathclaws in half.)

Speed: Subsonic with at Transonic combat speed and reactions (Capable of moving at a fraction of the speed of soundwaves fired from the Sonic Emitter, and can dodge them at relatively close range) with Subsonic to Supersonic+ attack speed (Capable of tagging opponents similarly fast to him, and has access to weaponry such as sniper rifles), Speed of Light projectile speed with Energy Weapons.

Lifting Strength: At least Athletic Human (The players maximum carry weight is 400 lbs), likely at least Class 1 with Power Armor (Can physically stand up to Deathclaws and similarly giant monsters)

Stamina: Superhuman (Survived being shot directly in the head at his weakest, never seems to get tired even if walking in the Mojave with no rest even with broken limbs)

Standard Equipment: A 9mm pistol, a laser pistol, his Pip-boy, bobby pins and a screwdriver (for lockpicking), a few stimpaks, his Vault 21 jumpsuit, Iconic NCR Ranger combat armor (or "Black Armor") and a .44 magnum, as well as a wide variety of additional weapons including various pistols, rifles, shotguns, sniper rifles, submachine guns, miniguns, laser weapons, gauss rifles, flamethrowers, grenades, knives, razors, swords, chainsaws, sword-shaped chainsaws, katanas, axes, spears, hammers, gauntlets, baseball bats, etc., as well as the Big Mountain Transportalponder! device and The Euclid C Finder Orbital Laser Beam. Additionally has a wide variety of armor including stealth suits and power armor, and various consumables such as stimpaks and items/drinks/chems that enhance his stats. Also possesses venom that can be applied to weapons, stealth boys that render him invisible, a deck of cards, and other miscellaneous items.

Intelligence: Genius (Opened a futuristic door with a bobby pin and a screwdriver, can make people at the verge of death survive, can cure most diseases and mutations known to man, can upgrade/create and repair pretty much any gun there is, outsmarted the people of the Think Tank who invented teleportation, force fields, special modified energy weapons, sonic emitters, perfectly talking appliances, gene splicing, gene modification, Tesla coils, simulations, and other technological wonders. understands ED-E incomprehensive robotic speech.)