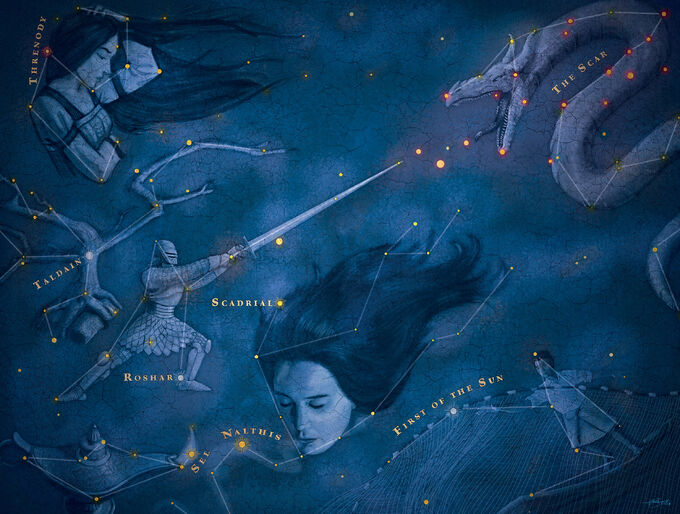 The pride and joy of fantasy author Brandon Sanderson, the Cosmere is a collection of fantasy works that share the same universe. Though most of them are stand-alone novels or series with their own intricate lore and magic systems, they each share subtle connections through an overarching meta-narrative.

The origin of all the magic systems, divine conflicts and even life in the Cosmere. Long ago, on a world called Yolen, there was a being or a force known as Adonalsium. Described as a divinity of supreme power, it was nonetheless assassinated by a group of sixteen men and women through (as of now) unknown means and for unknown motives.

After Adonalsium shattered into its present form, the pieces were given to or taken by individuals that then had the powers of the aspect of the Shard of Adonalsium (i.e. each Shard carried a facet of Adonalsium's original personality, so each Shardholder gradually found themselves overtaken in body and mind by, say, Adodalsium's sense of Honor, Ruin or Preservation). This would have unfortunate effects on the psyche of the new god, leading to disastrous rivalries between conflicting personalities that would devastate whole worlds across the Cosmere.

These people tend to act like imperfect gods, capable of creating and destroying worlds. Many of these "gods" give specific magical powers to the people on their worlds, and most of Brandon Sanderson's novels take place on one of these planets. The nature of the common people's powers is modeled after the power of the Shard in question.

Elantris was the city of the gods. Elantrians were people who had been magically transformed by a strange effect that strikes people at random, turning them into near-immortals able to command powerful magics. Anyone the transformation took—beggar, peasant or nobleman—would leave their old, mundane lives behind and move to Elantris, to live in glory, wisdom, and splendor, worshiped by mere mortals for all eternity. Eternity, as the introduction puts it, ended ten years ago. In a cataclysmic event that tore open the land, the magic suddenly failed, turning the Elantrians into grotesque zombie-like creatures stripped of their magic and their glory. The transformation still strikes at random, but now as a curse, condemned by all the religions of the world.

But the magic is returning. We have immortals capable of bending the laws of physics, demons that can shrug off magical energy blasts and high-speed supernatural martial arts.

Imagine a world where the Chosen One turned to the dark side. After saving the world from a terrible evil known only to the histories as "The Deepness," he established the Final Empire, an immortal reign to last for eternity, fashioning himself into a cruel and all-powerful tyrant known only as the Lord Ruler. A thousand years of oppression and subjugation later, a sliver of hope shines through when a group of thieves--led by a charismatic madman--plot a revolution against their messiah.

Magic users manipulate metals and alloys to gain superpowers: from strength to speed, enhanced senses to empathetic manipulation. There are also rampaging orc-like monsters called Koloss, shapeshifting spies known as the Kandra, and the Lord Ruler's own warped high priests the Steel Inquisitors (who have spikes for eyes).

As of its sequel series Wax & Wayne, the Mistborn world has now upgraded to a steampunk setting complete with guns, explosives, trains, airships, and new alloys and metals for new powers (many of which are outright hax).

An epic fantasy series set on a world with unpredictable and absurdly dangerous weather, once upon a time mankind was nearly on the verge of extinction fighting off against the demonic Voidbringers. They were saved by the timely intervention of the Knights Radiant, turning the tide and ensuring humanity's survival. Millenia of conflict later, however, and the Knights Radiant turned on humanity and abandoned them, leaving their superpowered gear behind. This, in turn, created an arms race that would plunge future kingdoms into endless wars... all the while ignorant of the possible return of the Voidbringers.

Shardblades are hax weapons that ignore conventional durability and go straight to the metaphysical. Shardplates are magical power armor that can regenerate and grant enhanced physicality. Magic can come in the form of manipulating light, gravity and other natural phenomena.

T'Telir is a city of colors, intrigue, and conspiracy, where people barter and sell Breath - a form of Investiture every human is born with - to a circle of living gods, referred to as the Returned. Awakeners breathe life into inanimate objects, Commanding them to perform objectives in their stead, with an army of lifeless corpses animated to form a military force unmatched by any other in the kingdom's sphere.

After numerous years, the already strained treaty between the Hallendren and Idrian empires is ripping at the seams, with the Idrian king forced to send one of his daughters to be forced to conceive a stillborn child with the God King of T'Telir to serve as his Returned heir. The king is forced to make a choice between the safety of his daughters and war - sending his youngest child to placate the treaty so that they can stave off a bloody feud.

At first glance, it's a little weak as far as fantasy universes go. The majority of magic users and fighters throughout the major Cosmere series typically demonstrate peak human to slightly superhuman physical prowess. Even the most prominent mortals on Shardworlds typically only accomplish feats in the realm of destroying buildings (Waxillium drawing on his full metalminds, Vin weilding the Mists, Nightblood, and Thunderclasts on Roshar), while there are weaponry on Scadrial durin Era II that can reach nuclear-levels of destruction.

However, the magic systems on each planet (Scadriel, Sel, Roshar, etc.) and the metaphysics the universe operates under (three layers of reality referred to as the Physical Realm, The Cognitive Realm and The Spiritual Realm) allows for a number of broken and hax abilities major characters have been able to access over the course of their respective series.

For examples: Surgebinders in The Stormlight Archive can "Lash" (manipulate gravity) an opponent to the sky. Allomancy in Mistborn can stop or speed up time in wide bubbles of localized space/time. The AonDor from Elantris can bend space in a matter of seconds, allowing for instant travel.

The aforementioned Shardblades (and the enchanted sentient sword Nightblood from Warbreaker) can sever souls. One cut to the limb, even if it's minuscule, can cause an otherwise perfectly functional and healthy limb to be permanently limp and useless.

The Shards, the sixteen gods that rule the worlds of the Cosmere, are powerful enough to rearrange the order of planets in a solar system, rewrite the laws of nature and destroy worlds if need be. They also possess limited omniscience, and their very presence can generate magical fields and violent storms worldwide. Keep in mind, they're each only one-sixteenth of a greater and more powerful god.

New additions to the Mistborn and Stormlight Archive books (among others) might reveal more and better feats in the future. Already in the Wax & Wayne series, Allomancers and Feruchemists who can bend time, move at supersonic speeds and regenerate from headshots have now become a thing due to technological progress improving metallurgy methods. 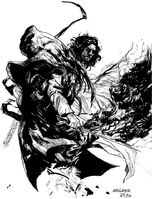