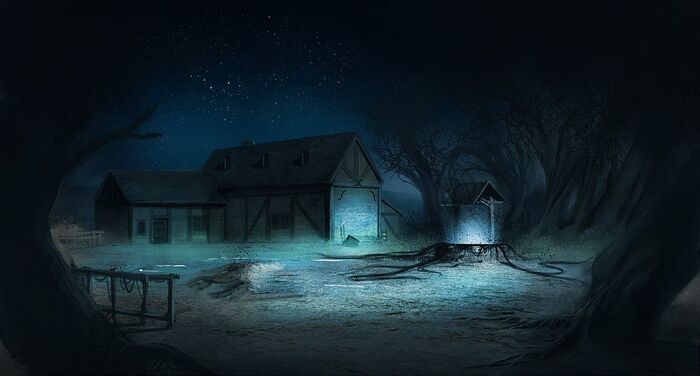 The Colour Out of Space is a group of entities (or small parts of a larger, single entity) that arrived on earth inside a meteorite sometime in the 1880s. After being released in a local farming community, it began to spread, infecting the wilderness and causing strange mutations and alterations to both flora and fauna. While the Colour did not appear to be composed of any form of matter, nor any type of light that we know of, it was perfectly capable of affecting all it touched in strange ways. It was soon revealed that the Colour was "feeding", as any biological material it touched turned to dried husks or dust after it left. While some of the Colour could be seen leaving the planet, shooting off into space, some of it remained in the area and continued to spread until the entirety of it was covered during a flood. The area became known as the "Blasted Heath", and became a reminder of those strange times. To this day, the locals refuse to drink the water, and some say it still gives off an unearthly glow.

Age: Unknown. It arrived on earth via a meteorite in the 1880s.

Classification: It is unknown what exactly the colour is, let alone if it even originates from our plane of reality. It appears as a sentient colour capable of moving freely and expanding itself seemingly infinitely. Despite being able to separate itself in any way it pleases, whether it is part of a species or instead a singular entity remains unknown.

Powers and Abilities: Non-Corporeal (Seemingly able to move over and through anything regardless of substance or state of matter), Intangibility, Immortality (Type 5, as what appears to be a living colour it cannot "die" or "be killed" in a traditional sense), Size Manipulation (Can expand without limit), Corruption (Able to "infect" other substances and change their colour), Biological Manipulation and Absorption (Any biological matter that has been "infected" will experience a variety of strange mutations and trait alterations, being reduced to a shriveled husk or even dust once the colour leaves and is done "feeding"), Possibly Higher-Dimensional Manipulation and Abstract Existence

Attack Potency: Unknown (Its interaction with the physical world appears limited. However, it seems to be able to completely destroy any form of biological matter. Stated to be "a frightful messenger from unformed realms of infinity beyond all nature as we know it"), ignores conventional durability with corruption and other abilities

Speed: Varies (The colour initially spread slowly), up to Massively FTL+ (demonstrated these speeds when leaving the planet and vanishing almost instantly back into the sky and out of our solar system. It is implied to have traveled from another galaxy, or possibly even another realm of existence)

Durability: Unknown (As an entity without any physical properties, the colour is completely unaffected by all basic forms of attack), non-corporeality and intangibility make it difficult to kill

Range: Varies (Started off on only a small hunk of meteorite, eventually spread over the entirety of a rural town). Up to Interstellar (Implied to have continued spreading had most of it not left the planet and made it's way into intergalactic space)

Intelligence: Unknown. It is likely the being lacks a basic thought process, only existing to spread and consume.

Note: Credit for the image goes to Asahisuperdry.

Retrieved from "https://vsbattles.fandom.com/wiki/The_Colour_Out_of_Space?oldid=6287861"
Community content is available under CC-BY-SA unless otherwise noted.