VS Battles Wiki
Register
Don't have an account?
Sign In
Advertisement
in: Characters, The Neverending Story, Female Characters,
and 7 more 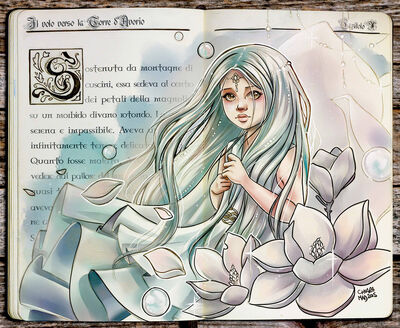 The Childlike Empress is the monarch of Fantasia, who resides in the capital called Ivory Tower in the heart of the realm. Although she is nominally the ruler of Fantasia, she rarely interacts with the outside world. Should she die, Fantasia and all Fantasians would cease to exist.

The amulet known as the 'AURYN' is her emblem, and those who wear it are her representatives. As explained by Morla the Aged One, her lifetime is not measured in years or in time ("she's much older than the oldest inhabitants of Fantasia, or rather, she's ageless"), but by names, which only the imagination of a human child can give her. When she begins to need a new name, she begins to fade away, causing the Nothing to appear in Fantasia. She sends Atreyu on the Great Quest, which brings Bastian Balthazar Bux to Fantasia, and Bastian gives her the name of 'Moon Child', which restores Fantasia and begins the second half of the novel.

Her description is that of an indescribably beautiful young girl, appearing no older than ten, yet much older than the oldest Fantasians. Her hair is snow-white, as is her gown, and her eyes are the color of gold, earning her the title "Golden-Eyed Commander of Wishes".

Age: Older than any other creature in Fantasia

Attack Potency: High Universe level (If she dies, Fantasia is destroyed and through her, Fantasia is restored after being reduced to a single grain of sand. Fantasia itself is infinite)

Intelligence: As the oldest being in Fantasia presumably high

Weaknesses: Unless Fantasia as a whole is threatened (which it would be if she is killed) she never makes use of her power; requires a human child to give her a new name after certain time periods otherwise she will die